NEXT:Bob Schieffer to the Press: 'We're Performing a Service That's As Crucial to Democracy As the Right to Vote'
PREVIOUS:How Ryan Ruocco Went From College Radio Host to Multi-Sport Play-By-Play Man 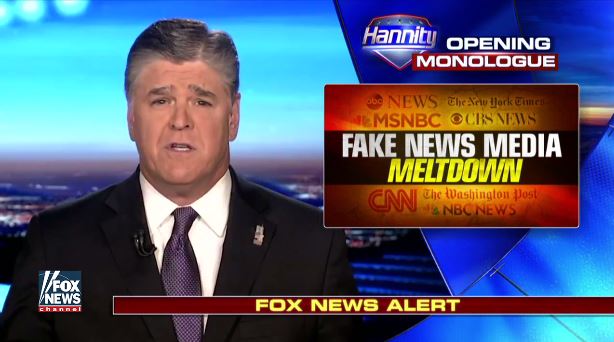 Fox News opinion host Sean Hannity, like Bill O’Reilly before him, often makes the media his lead story. Like last night when he called them “morally bankrupt.” As his over-the-shoulder graphic showed, he was talking about NBC News, CNN, MSNBC, CBS News, ABC News and others.

But does he include his FNC news colleagues as well?

Wallace generally lives in peaceful co-existence with Fox News Channel’s opinion folks, except when he hears some of them echo President Donald Trump’s criticism of the news media. Fake news? He’s fighting back.

“It bothers me,” Wallace said in an interview. “If they want to say they like Trump, or that they’re upset with the Democrats, that’s fine. That’s opinion. That’s what they do for a living.

In the AP profile, Wallace, who turned 70 on Oct. 12, also talks about working for so many years in the shadow of his father, legendary CBS News journalist, the late Mike Wallace. “I actually feel like I’m coming in to my own, as a journalist, as an interviewer, as a debate moderator. I feel like I’m in a really good stage in my career, not at all like I’m on the way out.”