NEXT:Michael Strahan and Sara Haines Have Been Named Co-Hosts of GMA Day
PREVIOUS:Chris Wallace Is Vacationing in Russia Days After His Interview With Vladimir Putin 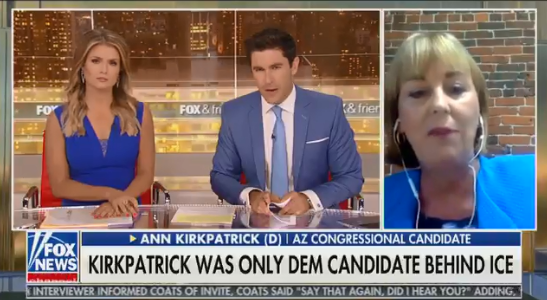 Well, here’s something you don’t see every morning. Fox News’s early morning program Fox & Friends First thought they had invited Democratic congresswoman Ann Kirkpatrick to appear on the program today. Kirkpatrick represents Arizona’s 2nd congressional district, is up for reelection this year, and she had apparently been booed during a debate for expressing staunch support for the U.S. Immigration and Customs Enforcement agency (ICE).

But Kirkpatrick was not the person who appeared on the program. As you’ll see below, Massachusetts state senator and congressional candidate named Barbara L’Italien showed up on the show via Skype, and proceeded to slam the president.

F&F First co-hosts Jillian Mele and Rob Schmitt were under the impression the person they were speaking to was Kirkpatrick. And as the statement below notes, so were the producers.

And the full transcript:

Mele: Joining us the candidate, the only democrat on stage to support ICE, Ann Kirkpatrick. Tell us why you do support ICE?
L’Italien: Good morning. I’m actually here to speak directly to Donald Trump. I feel that what’s happening at the border is wrong. I’m a mother of four and I believe that separating kids from their parents is illegal and inhumane. I’m state senator representing a large immigrant community and running for Congress in Massachusetts, I keep thinking about what we are putting parents through and imagining how terrifying that must be for those families, imagining how it would feel not knowing if I’d ever see my kids again, we have to stop abducting children and ripping them from their parents’ arms.
Schmitt: Okay.
L’Italien: Stop putting kids in cage, stop making 3-year-olds defend themselves in court.
Schmitt: The practice has stopped at this point, Miss Kirkpatrick, right?
Mele: Kids have been reunited with their families.
L’Italien: Again, my name is Barbara L’Italien and I refuse to believe that our only option —
Schmitt: Okay.
Mele: All right.
Schmitt: That didn’t go as planned.
Mele: That happens sometimes. Time for a break?
Schmitt: Yeah.

After the break, Mele made an on-air correction.

We want to apologize for the last segment a few minutes ago. we were told Ann Kirkpatrick was going to be on the show. As you saw somebody else stepped in front of the camera. We are working to figure out how that happened.

Update: Here’s a statement from Desiree Dunne, the ep of Fox & Friends First:

“This morning we invited Congresswoman Ann Kirkpatrick to appear on Fox & Friends First through her press contact on file Joe Katz, who accepted the invitation on Kirkpatrick’s behalf. Katz followed with an email confirming the segment, which also included background information and a campaign logo for Ann Kirkpatrick. During the actual segment, Barbara L’Italien, appeared on camera instead of Kirkpatrick. Despite speaking to producers prior to the interview, L’Italien did not identify herself as anything other than Kirkpatrick until she was live on air, at which point we ended the interview.”