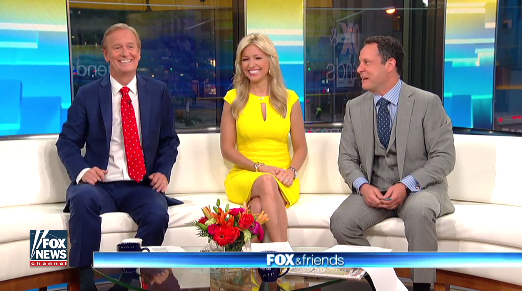 If you’re like President Trump and tuned into Fox & Friends this morning, you may have noticed Ainsley Earhardt, Brian Kilmeade, and Steve Doocy were hosting the program from a different location. For the first time in nearly two decades, the network’s morning show debuted from a new venue: Studio F. The multimillion dollar studio was unveiled on election night 2016, and its second floor will be the program’s home for the foreseeable future.

Earhardt, Doocy and Kilmeade even got a new “curvy couch,” and the trio will have access to two touchscreen monitors and a LED video wall on the second floor as well.

“It’s a nice toy to have,”Jay Wallace, FNC’s evp of news and editorial told Adweek back in November. “I hate to say toy because it cost millions of dollars.”

The ground floor of Studio F, which used to house a Charles Schwab branch and a FedEx Kinkos store, features three news desks, a circular LED video floor, a video chandelier that can be raised or lowered, a news ticker, four direct-view monitors and a LED curved video wall. There’s also a glass stairway which leads up to the second floor that’s highlighted by a nine-monitor, floor-to-ceiling video wall.