NEXT:Coverage of the Senate Impeachment Trial Is Moving Into the Weekend, Here's What Networks Have Planned
PREVIOUS:GMA, Today, CBS This Morning Lead Respective Broadcasts With the Kobe Bryant Story 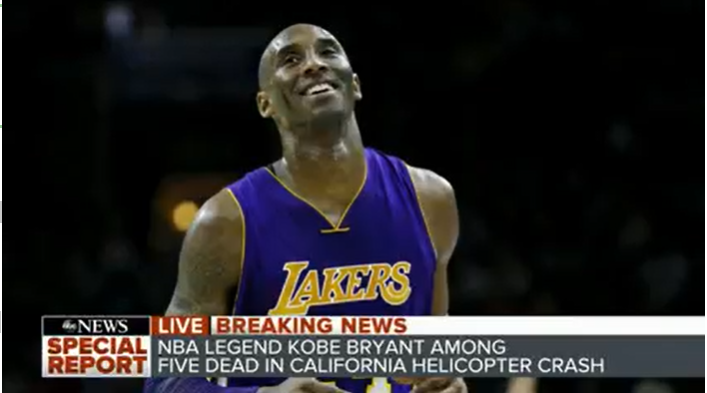 Los Angeles Lakers icon Kobe Bryant, and his 13-year-old daughter Gianna were among 9 people who were killed Sunday morning when Bryant’s helicopter he was traveling in crashed and burst into flames in the hills above Calabasas, Calif., just north of Los Angeles.

Bryant is a 2-time U.S. gold medalist who was drafted right out of high school in 1996, and went on to become a 5-time NBA champion, 18-time All-Star, and the No. 4 scorer in NBA history who spent his entire 20-year NBA career with the Lakers.

Bryant is survived by his wife Vanessa, and 3 daughters.

Fox News reported the news of Bryant’s death (citing a TMZ report) at 2:45 p.m. ET. However, the network stated at the time that they couldn’t independently confirm the report.

But, here’s how the broadcast networks reported the news:

Stone: You’ve probably heard a subdued tone over the course of the last 20-25 minutes. News trickling about the passing of Kobe Bryant. He died this morning. 41 years old, one of the all-time greats in the NBA. A heavy heart, guys, across all of basketball. This is the NBA. This is major stuff. Completely unexpected come out of the blue. highly respected domestically, internationally, what he has done on and off the court. You can just feel the heaviness and the weight of this as news starts to trickle in.

Tessitore: It is so sad to now confirm the tragic news that was first reported by TMZ that former Lakers star Kobe Bryant was killed today in a helicopter crash in the Los Angeles area, sources told ESPN’s Adrian Wojnarowski and TMZ first reported Bryant’s death. Unimaginable news to share on this Sunday. The 41-year-old Kobe Bryant has passed away in a helicopter crash. The 18-time NBA all-star, and one of the pillars in NBA history and in modern sports history. We will have continuing coverage on all of our ESPN platforms throughout the day. At some point we will break away from our coverage here from this 2020 Pro Bowl and we will give you the latest that is coming in from all the news sources. But we share with you the tragic news, casting a pall across this Sunday in America that Kobe Bryant was killed in a helicopter crash today.

Llamas: We come on the air with this tragic news coming in from California. A source confirming to ESPN that NBA legend Kobe Bryant has died in a helicopter crash in Southern California. The Los Angeles county sheriff’s office confirming that five people are dead in that crash near Calabasas. (video of wreckage is shown), northwest of downtown Los Angeles. Video from the crash site showing the wreckage on fire in the hills near a building complex. First responders are on the scene. Bryant who was 41 years old and had 4 daughters played for the Lakers and is the nba’s 4th leading scorer of all time. Tweeting his respect to LeBron James just 16 hours ago last night when James passed him. Let’s go straight to ABC News senior national correspondent Matt Gutman who’s on the phone from California. Matt, what do we know about this crash?

Gutman: We know that it happened about an hour ago, tom, and pretty quickly an APB went out to most of the cops in the area called the hill division of the L.A. sheriff’s county office.It said “5 people down in a helicopter crash. it’s believed Kobe Bryant is there.” Rescue personnel have been swarming there. I’m heading there right now. I think you mentioned something really important in your preface to this and that is that Kobe Bryant played 20 seasons here in L.A. It is hard to underscore how important Kobe was to Los Angeles. He brought the Lakers back. He defined an entire generation for people. Just before I ran out the door my wife said, “oh my lord, we grew up with Kobe.” The fact that 4 of his children are believed to be on that helicopter with him, all daughters, one of them a newborn, is simply devastating. So, this is going to really hit hard in southern California. Obviously everybody hoping that this is not the case but, you know, from the police reports right now, it appears that Kobe Bryant is down in that helicopter right off the hills of Calabasas so near to where he played all those seasons as an L.A. Laker.

Llamas: News that has shaken not only southern California, Matt, but has shaken so many across this country. when you see the wreckage video, you can understand why no one was able to survive that crash. again, a source confirming that ESPN that nba legend kobe bryant has died in a helicopter crash. We will have complete coverage tonight…

Gutman stating that “4 of his children are believed to be on that helicopter with him, all daughters, one of them a newborn,” turned out to be false.

During the Pro Bowl game, ESPN sideline reporter Lisa Salters interviewed a number of players to get their reactions to Bryant’s passing, and there was even a moment of silence inside the stadium in Orlando in honor of Bryant…which then turned into a “Kobe, Kobe” chant.

ABC News has produced a one-hour special, on the life and legacy of Kobe Bryant. GMA’s Robin Roberts and ESPN and ABC News reporter Tom Rinaldi anchor the hour that features reporting on the latest details on the crash, the significance of Bryant’s contribution to basketball as one of the greatest players of all time, and his cultural and philanthropic impact on the world. The special will also include interviews with basketball players and people that knew him. Kobe Bryant: The Legend. The special will air tonight at 10 p.m. ET, on ABC and ESPN.

CBS was televising the final round of the PGA Tour’s Farmers Insurance Open, ironically in Southern California, when at 3:04 p.m. ET, CBS Sports host Adam Zucker reported the news from CBS Sports studio in New York.

Zucker: According to multiple reports, Kobe Bryant has been killed in a helicopter clash. Widely considered one of the greatest festival players of all time was reported that 1 of 5 people killed in the crash in Calabasas, Calif., today. But the identity of the victims have not been officially confirmed. The 5-time nba champions wife Vanessa and 4 daughters were not believed to be on board. Bryant was 41 years old. …

Zucker, instead of a CBS News anchor, provided updates throughout the day from New York. CBS News correspondent Jonathan Vigliotti later joined from Calabasas. Additionally, CBS Sports’  broadcaster Jim Nantz reflected on Bryant’s career throughout the afternoon golf broadcast, and CBS Sports’ Amanda Balionis got Tiger Woods‘ reaction to the news right after he walked off the 18th green. Woods and Bryant were longtime friends.

Tirico, who covered Bryant for decades across his tenures at ESPN and more recently NBC Sports, also appeared on MSNBC throughout the afternoon.