NEXT:Early Nielsen Data Shows 19.9 Million Viewers Watched Last Night's RNC Coverage Across 6 Networks, Up From Night 3, but Down From 2016
PREVIOUS:Here Are Final Ratings for the 2020 DNC and the 2020 RNC 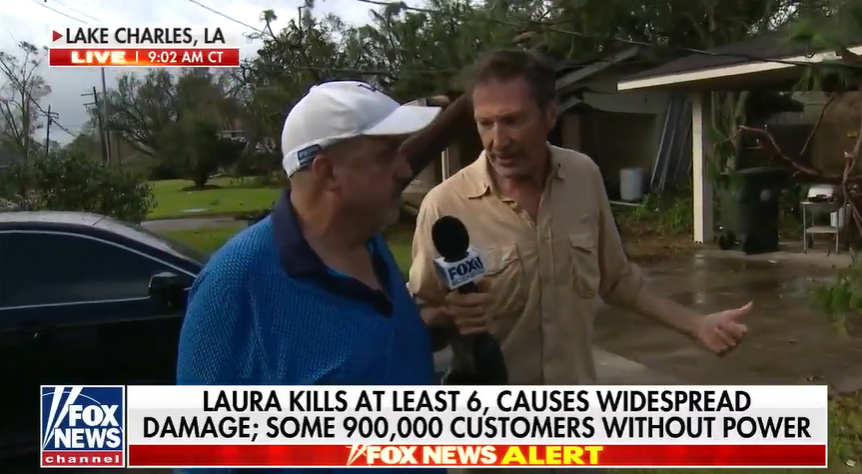 Fox Business correspondent Jeff Flock has remained in Lake Charles, La., to cover the aftermath of Hurricane Laura, a disaster which killed six people and caused nearly 1 million businesses and homes to be without power.

A Lake Charles homeowner let Flock into his home earlier today, which was destroyed as a tree collapsed right in the spot he was sitting and watching TV (he was watching Fox News, ironically).

Later, Flock speaks with a bridal store owner who gets emotional over her customers losing their wedding gowns they were meant to get married in after her store was destroyed.

For more TV news coverage of Hurricane Laura, check out our local news blog TV Spy.  The blog reports that KPLC, the Lake Charles station, had its broadcast tower collapse into the studio during the storm. Sticking with the KPLC theme, TVSpy also reports that meteorologist Ben Terry tragically had his house completely destroyed by the storm.

TVNewser sends its best wishes out to our readers in Louisiana Cajun Country, the southwestern part of the state, and southeast Texas as they begin their recovery from this horrific hurricane.