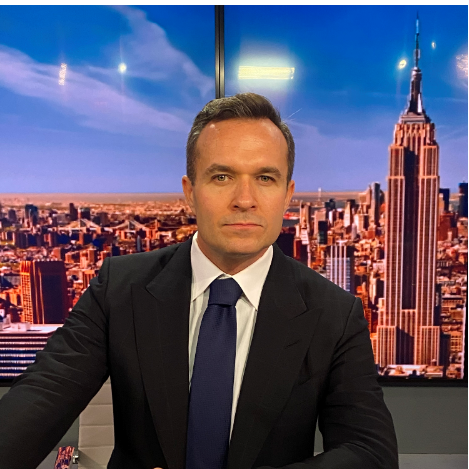 “I am very curious,” Kelly said in a statement. “I find that many people in the media have lost their curiosity. They just want to let you know what they know. I like to take a different approach.”

Kelly added: “This show is about providing more of a realistic and reasonable appraisal of the way things are.”

The son of NYPD Commissioner Ray Kelly, Greg Kelly served as a Marine pilot, before joining Fox News as a White House correspondent and Fox & Friends co-host. He is known to New Yorkers as the former co-host of Good Day New York with Rosanna Scotto on Fox’s flagship station WNYW. Kelly co-hosted GDNY from 2008-2012, and again from 2013-2017. Good Day New York was the top-rated morning show in the New York market during a chunk of Kelly’s first stint co-hosting the program.

Kelly was accused of rape back in January 2012, and the station took him off of Good Day New York after the accusation was made public. Prosecutors would later decline to seek rape charges against Kelly at after what they termed a thorough, 3-week investigation. Kelly returned to the WNYW airwaves shortly thereafter.

Newsmax TV has signed cable agreements with all major MVPD outlets, including DirecTV, Dish, Xfinity, Spectrum, Fios, U-verse, Optimum, Suddenlink, and Cox, among others, and it expects to reach close to 80 million MVPD homes in 2020.