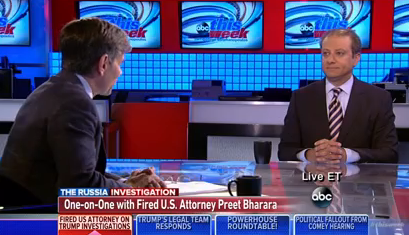 The headliner is the former U.S. Attorney for the Southern District of New York, Preet Bharara, who is joining CNN as a senior legal analyst. The news was first reported by Politico.

Formerly the lead prosecutor for the country’s most populous district (New York City), Bharara has dealt with politicians and business magnates over the years, including the Trump Organization.

Pres. Trump reportedly promised Bharara that he would keep his gig in the new administration, even though everyone else from the Obama administration would be let go. That didn’t happen.

Only hours before landing the CNN role, the media-savvy Bharara launched the first episode of his new podcast, Stay Tuned. He described feeling awkward as Pres. Trump kept calling him and feared the president would’ve asked him to do “something inappropriate” while still U.S. attorney.

Bharara is known for his concise, clever barbs and has developed a significant Twitter following since being fired by POTUS back in March. He also happens to be the inspiration for the Chuck Rhoades character in the Showtime series Billions.

Bharara will reportedly make his CNN debut on State of the Union with Jake Tapper this coming Sunday, according to CNN’s Brian Stelter.

CNN also added former government ethics head Walter Shaub as a contributor, a man who has been quite critical of the sitting administration as well.

Upon resigning this past summer, Shaub said the government was now “pretty close to a laughingstock” when it came to ethics, a problem that could have global implications.

Both Bharara and Shaub will undoubtedly have much to say when it comes to major investigations (specifically the one led by Robert Mueller) and ethical concerns in the Trump administration.