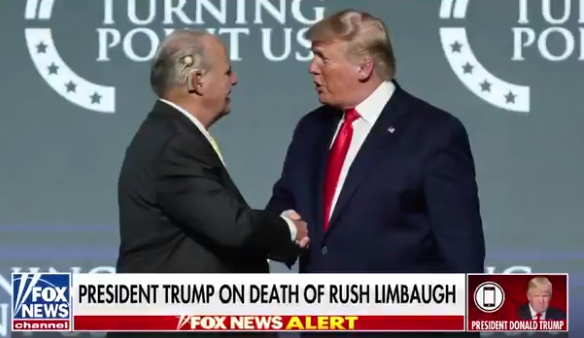 This was the ex-president’s first live appearance on the network since leaving the White House last month, and his first since the Jan. 6 attack on the Capitol. Co-anchors Bill Hemmer and Harris Faulkner said they wanted to keep the discussion exclusively focused on Limbaugh.

“Mr. President, we probably have 100 questions for you, but so many of them are not appropriate for this venue. So we’ll keep it on this topic for now,” said Hemmer.

The former president told Hemmer and Faulkner that he and Limbaugh spoke three or four days ago.

Even during the discussion of Limbaugh’s passing, Trump proceeded to lie about the 2020 election result: “Rush Limbaugh thought we won. And so do I, by the way. I think we won substantially.”

He went on to complain about Republicans not being tough enough. He said, “You would have had riots going all over the place if that happened to a Democrat. We don’t have the same support at certain levels of the Republican system.”

Additionally, Hannity will present an interview with Trump Wednesday evening to further discuss the life and legacy of Limbaugh. The entire hour will be dedicated to memorializing him with contributions from FNC host Mark Levin and FNC contributors Newt Gingrich and Dan Bongino.