NEXT:Scoreboard: Tuesday, Oct. 15
PREVIOUS:Jake Tapper Broke the News to Dave Matthews That DMB Has Been Nominated for the Rock 'n' Roll Hall of Fame 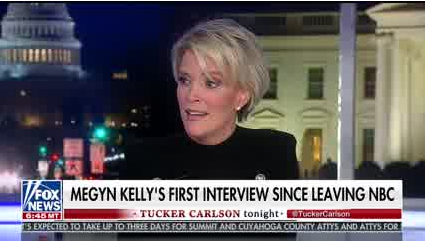 Both Kelly and Carlson criticized their former employer, NBC (Carlson was a MSNBC host from 2005-2008) for how the network has handled Harvey Weinstein coverage and the internal Matt Lauer investigation.

“The number one that needs to happen now is they need to release any and all Matt Lauer accusers from their confidentiality agreements. NBC says it has nothing to hide. Great. Let’s not hide anything,” Kelly told Carlson. “There needs to be an outside investigation into this company. They investigated themselves. That doesn’t work.”

She added: “If these are the people overseeing the investigation into NBC — they had Kim Harris, the general counsel, do the investigation — then how are people supposed to trust it? That’s why you’ve got to get somebody on the outside.”

Earlier in the day, Hilary Smith, a corporate spokeswoman for NBCUniversal, told NPR’s David Folkenflik: “The top leaders of NBC News still have the confidence of senior leadership within the company.”

Kelly and NBC parted ways in January, with the network cancelling Megyn Kelly Today at around this time last year. The show was cancelled not long after she remarked on-air that she did not understand why the use of blackface on Halloween was inappropriate. The remark drew criticism both on social media and from colleagues at the network, including mainstay Al Roker.

Kelly issued a heartfelt apology on-air the following morning, but it was not good enough for NBC News management, and her 9 a.m. program was taken off the air, Friday, Oct. 26.

Carlson moved to a discussion about media, more generally. He took a shot at CNN president Jeff Zucker, and hoped to have Kelly join him.

He added: “Sounds more like a political campaign than a news judgment.”

She didn’t seem to take the bait. Kelly argued that impeachment is really big news and defended Zucker.

“Impeachment is a big story,” she replied. “If the president of the United States is going to get impeached and possibly bounced out of office, it’s a major, major story. So, I think that’s defensible on the part of Jeff Zucker but I do think the hyperfocus on by most media at the expense of all else is not new.”

Kelly also spoke about a potential return to television.

“I’ll get back on that horse soon — because this has been fun,” she told Carlson. “So I’ll probably get back out there, but right now I’m still enjoying my day-to-day life with my family.”