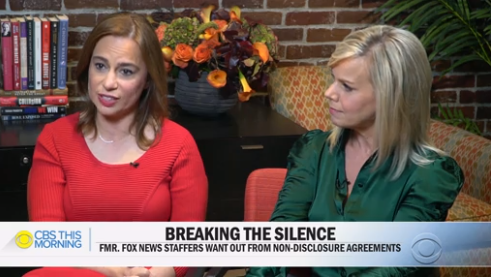 Former Fox Newsers Gretchen Carlson and Julie Roginsky called on their former employer to drop their signed non-disclosure agreements (NDAs) during a CBS News interview which aired earlier today on CBS This Morning.

NBCUniversal, which has been in hot water as of late, announced last week former NBC News employees who believe “they cannot disclose their experience with sexual harassment as a result of a confidentiality or non-disparagement provision…can contact NBCUniversal and we will release them from that perceived obligation.”

Carlson says she hopes that Fox will follow suit.

“I think this is the latest phase in the revolution, we’ve made so much progress over the last three years,” Carlson told CBS This Morning national correspondent Jericka Duncan.

“We want to speak for ourselves. We had a voice for a very long time,” Roginsky added.

There have been no reports of Fox News seeking legal action against women who have broken their NDAs.

You’ll remember that Carlson accused the late Fox News founder and chairman Roger Ailes of sexual harassment, which led to Ailes being fired in July 2016. Roginsky is a Democratic strategist and former Fox News contributor who also accused Ailes of workplace harassment and retaliation. The women settled their respective lawsuits against Fox in 2016 and 2017. Their multi-million dollar settlements came with strict NDAs.

Neither Carlson nor Roginsky says that they have broken their respective NDAs and Roginsky said she has no idea what would happen if she did.

“The onus shouldn’t be on us to try to find out. The onus should be on the companies to release us,” said Roginsky. “This is not an issue only emblematic of one industry or one political persuasion, it’s emblematic of a culture and society that tells women they have to keep quiet, and that has to end.”

Former Fox News employees are demanding to be released immediately from non-disclosure agreements over sexual harassment claims. @GretchenCarlson and @julieroginsky are among 6 former employees reportedly pushing to share their stories publicly. @JerickaDuncan spoke to the women. pic.twitter.com/PBzI2MCOkM

Duncan’s participation in this interview was important. The CBS Newser covered allegations of misconduct being made against then-60 Minutes ep Jeff Fager last September. When Duncan reached out to Fager for comment, the 60 Minutes ep wasn’t too pleased.

“Be careful,” Fager wrote to Duncan. “There are people who lost their jobs trying to harm me.”

Fox Corp. has yet to release a statement on the matter concerning Carlson and Roginsky, while Fox News released a statement last week: “Over the past three years, we have created an entirely new reporting structure, more than tripled the size of our HR footprint, instituted mandatory in-person sexual harassment training, started quarterly company meetings and mentoring events as well as implemented a zero-tolerance policy regarding workplace misconduct for which we engage outside independent firms to handle investigations.”