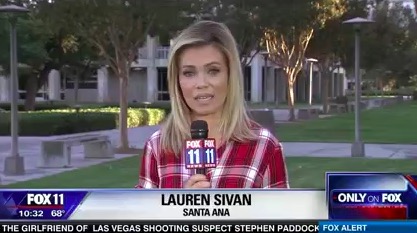 Lauren Sivan, a reporter at Fox-owned LA station KTTV, and a former Fox News Channel anchor, says Harvey Weinstein once masturbated in front of her after she rejected his sexual advances.

The 2007 incident happened at a club in Manhattan in which Weinstein was an investor. Sivan told her story to the Huffington Post’s Yashar Ali who reports:

Sivan says she rejected Weinstein’s advances, in part, because she was in a serious relationship at the time. Sivan was engaged to Fox News reporter Rick Leventhal in 2006. On Twitter, Sivan explains why she’s only coming forward now:

For those asking why I waited?
YOU try telling that story 10yrs ago. Only possible now because of women with bigger names far braver than me

Sivan has been a reporter at KTTV since 2011. In 2008-2009 she anchored overnights at Fox News. Sivan had also been a producer on Fox & Friends and started out as a production assistant on Fox News Sunday.