NEXT:NBC News Will Interview At Least 40 Employees As Part of a Post-Matt Lauer Review
PREVIOUS:Pres. Trump Watches Morning Joe Because 'It Fires Him Up For the Day' 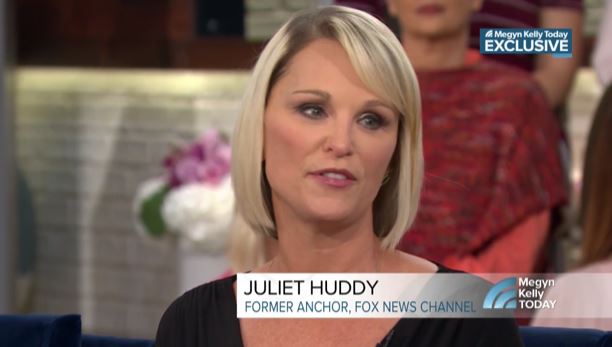 Many women have accused Donald Trump of sexual harassment over the years. He has even bragged about doing it on tape. But now it’s a former TV newser who is recalling her own strange experience with the 45th POTUS.

Former Fox & Friends host Juliet Huddy said earlier this week that Donald Trump tried to kiss her on the lips after taking her out to lunch in Trump Tower back “in 2005 or 2006,” according to Page Six, a time when Trump was host of NBC’s The Apprentice. Trump married his wife Melania in January 2005, which means the alleged action would have taken place while Trump was a married man.

Huddy was a guest on WABC Radio’s Mornin’ With Bill Schulz on Thursday when she spoke about her experience with the now-president.

“He took me for lunch… it was a very public situation,” Huddy said. “He said goodbye to me in an elevator while his security guy was there, in the Trump elevator. And he went to say goodbye, and rather than kiss me on the cheek, he leaned in on the lips.”

Huddy, who left Fox in Sept. 2016 after 18 years in various roles at the company (14 at Fox News), said she didn’t feel threatened by the alleged advance, but she was shocked. “I wasn’t offended. I was kind of like, ‘Oh my god.'”

She continued: “I was surprised that he went for the lips. But I didn’t feel threatened … he took me out to lunch to talk about maybe me doing something with The Apprentice. He used to watch Fox & Friends, the show I was hosting on the weekend. Whatever, everything was fine. It was a weird moment. He never tried anything after that, and I was never alone with him.”

Years later, Trump joked about the incident in front of a studio audience when he was a guest on her syndicated show The Morning Show with Mike and Juliet.

According to Huddy, he turned to the audience while the cameras weren’t rolling and said, “I tried hitting on her but she blew me off.” She said he was laughing.

“Now that I’ve matured, I look at things a little bit differently,” she explained, “I still think that even if that happened I would’ve said something like, ‘Whoa, whoa, whoa, whoa,’ but at the time I was a little shocked. I thought maybe he didn’t mean to do it, maybe I leaned in wrong. But I kind of was making excuses.”

Back in January, it was reported that 21st Century Fox quietly paid a “high six figure” sum to Huddy following her allegations of sexual harassment against former Fox News star Bill O’Reilly. LawNewz reported the settlement occurred before any lawsuit.

Huddy, who’s now a host on a different WABC Radio show, talked about Trump’s reaction to the allegations against O’Reilly, “I’ve seen him [Trump] many times over the years and he’s always been nice….When all the stuff came out about Bill O’Reilly, Donald Trump was one of the people who said, ‘I don’t believe this happened and I don’t believe he did it’… I was actually very disappointed in Trump, I thought, ‘You know what, f–k you.’ He [Trump] has met me a bunch of times and he knows I am not [a liar]”

Re: @PageSix story: Yes, it’s true. And though I’m offended by his comments on ‘other matters’ – as I said on @77WABCradio & @BillSchulz‘s show yesterday – I was neither threatened nor offended in elevator. End of story. Now, plz let me get back to @TheCrownNetflix.