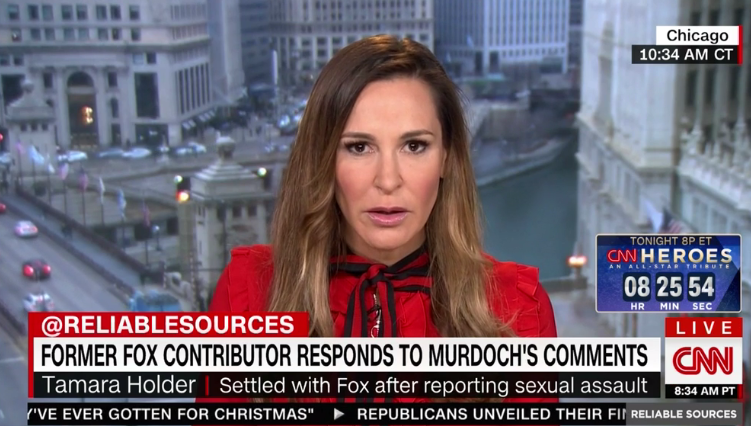 CNN Reliable Sources host Brian Stelter interviewed former Fox News contributor Tamara Holder on his program this past weekend. Holder accused former Fox News Latino vp Francisco Cortes of sexual harassment in September 2016, and he was fired not long after Holder filed the report. Holder’s contributor contract ran up on Jan. 1 of this year, and she eventually settled with 21st Century Fox for $2.5 million earlier this year.

Holder has been a critic of the network’s culture in the time since her departure.

The interview was a rather emotional one, with Holder especially critical of 21st Century Fox executive chairman Rupert Murdoch.

“I don’t have a job in TV anymore because the place that he has secured down like Fort Knox allowed abusive predators to prey on women who just wanted to work,” said Holder. “That is not nonsense. This is people’s lives.” She added that Murdoch “ruined my life.”

Holder also stated she believed Fox “will sue me for speaking out today.”

This interview took place fewer than 48 hours after HuffPo reported that “current and former Fox News employees” said they were “stunned,” “disgusted,” and “hungry for justice” after hearing of Murdoch’s comments during a Thursday Sky interview, right after the Disney-Fox deal was announced.

During that Sky interview on Thursday, which came not long after the extraordinary Disney-Fox deal was announced, the 86-year-old Murdoch provided a controversial answer to a question about whether or not he believes sexual misconduct cases have hurt his company’s bottom line in recent years.

“It’s all nonsense,” he told Sky’s Ian King. “There was a problem with our chief executive, over the year, isolated incidents.”

The company pushed back on the accusation that Murdoch was minimizing the cases in a lengthy statement, noting “Rupert never characterized the sexual harassment matters at Fox News as ‘nonsense.’ Rather he responded negatively to the suggestion that sexual harassment issues were an obstacle to the Company’s bid for the rest of Sky.”