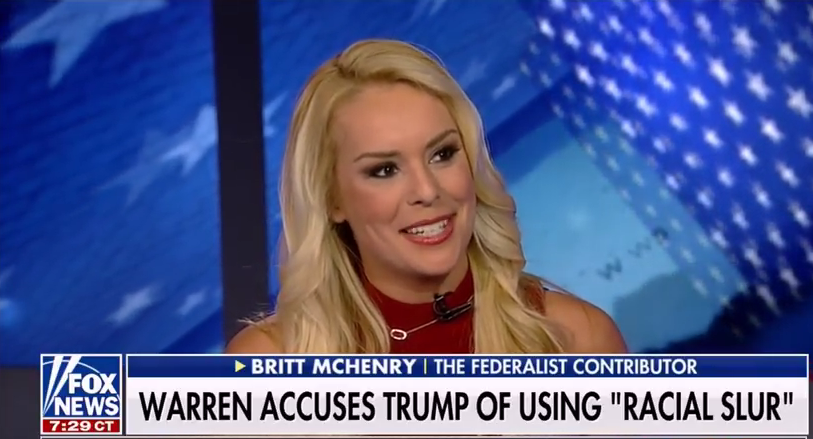 According to The Wrap’s Jon Levine, McHenry will focus her efforts on providing commentary for the network’s forthcoming 24/7 streaming news service, Fox Nation

McHenry, who has appeared across Fox News programming in recent years, is currently the host of Like It Or Not, a weekly roundup show which airs on Washington D.C.’s local Fox station, and launched in February. She also serves as a contributor to the conservative digital outlet The Federalist.

McHenry, 32, joined ESPN in 2014 as a reporter based out of Washington D.C. She is also known for an appearance in an April 2015 video that went viral during which she is seen verbally attacking a towing company employee in a parking lot (he apparently told her to lose weight later during the “back-and-forth”). ESPN suspended her for a week as a result of that incident.

McHenry also sparked controversy in May 2018 for tweeting she had been demoted from a previous job at ESPN because “I was white and paid too much.” She later deleted that tweet.

Speaking of Fox Nation, The New York Times broke the news back in February that a Fox News 24/7 streaming news service would launch in Q4 of this year. Fox Nation is meant for “superfans” and “in addition to live, daily programming and events, subscribers will receive access to 20 plus years of archival FNC programming.” Tomi Lahren is presently the face of the website.

“With our traditional cable viewership at an all-time high, we are proud to announce a new digital offering geared entirely toward the Fox News superfans, who represent the most loyal audience in cable, if not all of television,” Fox News svp of development and production John Finley said in a statement back in February. “This initiative will capitalize on providing that viewer, who is among the most affluent and well educated in cable, with a highly specialized content experience on a platform they can watch anytime, anywhere.”

FNC is joining other high-profile media companies who are set to launch or have already launched OTT services (ie. Viacom, CBS Corp., Disney) that are targeting younger viewers.