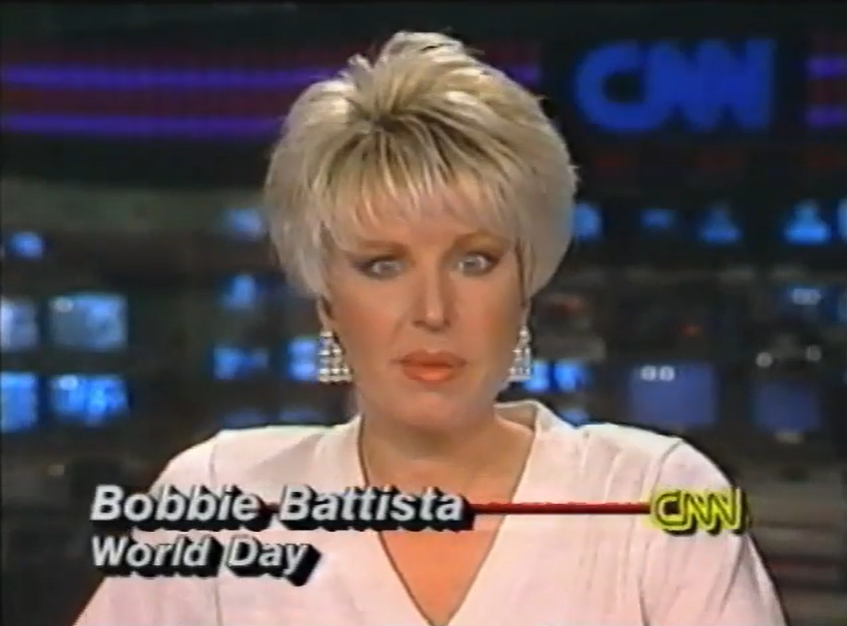 Former CNN anchor Bobbie Battista has passed away at the age of 67.

Battista had been living with cervical cancer for 4 years, before her death Tuesday morning.

A New Jersey native-turned Atlanta resident, Battista leaves behind her husband of 25 years, John Brimelow, and her step-daughter, who graduated from the United States Air Force Academy in 2015.

“Bobbie was the consummate trooper in her struggle with cancer, she was courageous and fearless in her battle and thoughtful for all the others in her life even as she fought through the pain,” Brimelow said in a statement. “My dear partner of 25 years of marriage has cut her earthly bonds and is now in peace.”

One of the original anchors for CNN Headline News, Battista spoke with TVNewser contributor Alissa Krinsky back in 2014 as part of our Where Are They Now? series.

Before heading down to Atlanta to work at a fledgling national cable news network named CNN, Battista had been the first woman anchor at Raleigh N.C.’s powerhouse station WRAL-TV, earning the gig in 1976. Alongside Charlie Gaddy, the duo’s evening newscasts posted massive ratings; and with those massive ratings came offers from higher-profile media outlets.

Including an offer from one Ted Turner.

On her move from local to national, Battista told TVNewser that her father thought CNN was a good move, and after weighing her options, she decided to heed her dad’s advice, arriving at CNN in 1981.

Battista is probably best known to millions of Americans for her coverage of the Gulf War.

“Everyone involved in that conflict – politically, militarily – they were watching CNN,” Battista told TVNewser.  “It was an amazingly important responsibility.”

She covered some of the world’s most significant stories over her 22 year tenure at CNN, including the Challenger tragedy, the fall of the Berlin Wall, the crumbling of the Soviet Union, and every presidential election along the way.

Battista decided to leave CNN in 2002, feeling “a little burned out” – and after a slew of what she viewed as disappointing changes at the network in the wake of the AOL-Time Warner merger.

“At its core,” Battista told TVNewser, “CNN is still very capable of doing trustworthy, and accurate, and honorable journalism, and there are still people there who represent that… But I think they’ve had so many leadership changes, a lot of talent changes, that they lose their way sometimes.

“They get caught up in things that are really not that important, like they’re very infatuated with gimmickry gadgetry… Poor Martin Savidge, having to sit in a flight simulator for weeks on end. It has left a lot of viewers cold.”

Battista would go on to create her own public relations firm, later returning to television news with a show on Retirement Living Television (RLTV).

Her most recent television news gig was on Georgia Public Broadcasting, where she hosted a nightly news program, On the Story. “It’s like The Godfather,” she told TVNewser in 2014 about her return to the airwaves. “Just when I think I’m out, I’m pulled back in!”