NEXT:Meet the Press Is Now No. 1 for Nine Consecutive Quarters Among Adults 25-54
PREVIOUS:A New Owner, but the Same Mission for The Weather Channel 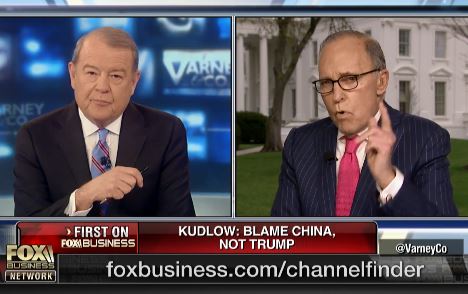 The markets are up again today (for now) after a wild Wednesday which began seeing a turnaround when a former CNBC host went on FBN.

When White House chief economics adviser, and former CNBC host, Larry Kudlow went on Stuart Varney’s Fox Business show just after 10 a.m. ET Wednesday the Dow was down 403 points. By the end of the interview, in which Kudlow said there was no trade war with China and that “backchannel talks” are ongoing to negotiate fair trade deals, the Dow was down 294 points.

“I’m going to speculate that Larry Kudlow moved the markets,” Varney said after the interview. The Dow was down 510 points at one point Wednesday, and finished up 230 points.

President Trump has said that one of the reasons he hired Kudlow as his top economic adviser was his ability to communicate in TV news interviews. “The president likes me as a media communicator,” Kudlow told CNBC when he was hired last month.

By the way, Varney’s three-hour morning show just finished Q1 2018 as the most-watched market program, averaging 290,000 viewers, ahead of CNBC’s Squawk on the Street/Squawk Alley with 219,000.