NEXT:Lester Holt to Receive 2017 Paul White Award For His Work in Electronic Journalism
PREVIOUS:Robin Roberts Brings Back Podcast for Season 2 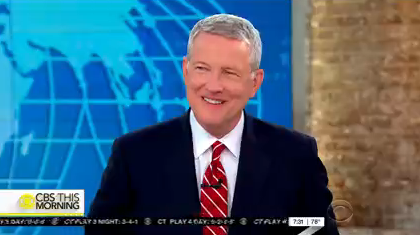 David Westin, who spent 13 years as president of ABC News, before moving to an on-air role with Bloomberg in 2015, is filling in today for Charlie Rose on CBS This Morning.

“Thank you for having me,” said Westin at the start of the show. “It’s good be with friends.”

Westin anchors Bloomberg’s morning show Daybreak, but got permission from his bosses there to fill in on CBS.

He will be a substitute host a few times this summer, we’re told, while frequent fill-in Anthony Mason is anchoring the CBS Evening News. Jeff Glor, WCBS anchor Maurice Dubois, and others will also fill-in on the morning show when Rose is away this summer.