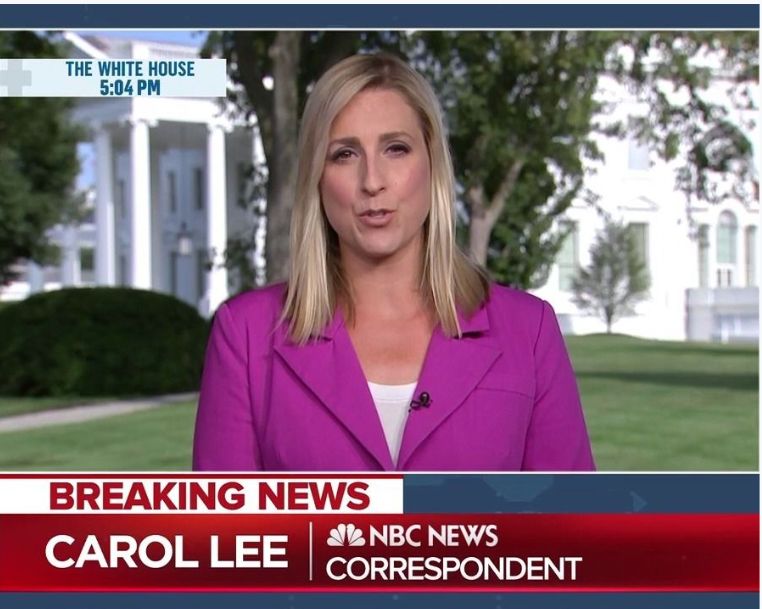 NBC News national political reporter Carol Lee is the next journalist to be featured in our 2020 TVNewser Notebook, and believe it or not, she is the first NBC Newser.

Before arriving at NBC in 2017, Lee covered the White House for The Wall Street Journal, reporting on politics, foreign affairs and domestic policy issues. She also served as president of the White House Correspondents’ Association in 2016 while she was still at the Journal, after serving on its board since 2010.

Lee joined WSJ as White House correspondent in 2011. Previously, she covered the White House for Politico and the 2008 campaign for the Sarasota Herald-Tribune.

We caught up with Lee earlier this week, and she provided us with an amusing story from her 2008 campaign coverage, what she thinks about the party conventions, and how social media is impacting her political coverage in general.

Lee: The first presidential campaign I covered was 2008. I was a reporter at the Sarasota Herald-Tribune in Florida. My editor assigned me to follow Rudy Giuliani, who had this Florida-or-bust strategy for the Republican primary wherever he went in the state. On primary night his speech was at Portofino Bay Hotel at Universal in Orlando, and everyone, including Giuliani, knew he would lose—except for John Voight. The Academy Award-winning actor had been flying around with Giuliani in the homestretch of the campaign and was a believer until the end. At one point he came over to talk to us reporters and noted how covering a campaign seemed a lot like working on a movie, where people get intensely close for a short amount of time, then it’s all over. That campaign was like that.

I moved to Washington to cover the White House in October. Before I did, I interviewed Joe Biden in Palm Beach County, and it was a lesson in what covering him at the White House would be like. I was in line behind the kid reporter Damon Weaver, who later came to the White House to interview President Obama. I got seven minutes, which with Biden was about time enough for one question.

As of now (mid-July), it sounds as though the Democratic Party’s convention in August will be largely virtual, whereas the RNC appears to be going ahead with a more traditional, in-person convention. As someone who has covered a number of these, what do you think is the best solution?

For reporters, the conventions are sort of one-stop shopping for sourcing and stories. Political leaders and elected officials are in one place for several days, so you can learn a lot by buttonholing people in the convention hall. And the speeches generate newsworthy moments and unexpected storylines, like in 2004 when the Democratic National Convention launched Barack Obama or the indelible images in 2016 of Michael Flynn leading a “lock her up” chant at the GOP convention.

Journalists will just find different ways to cover the conventions amid a pandemic. But for voters, the conventions can be galvanizing events that drive momentum into the fall. So it will be interesting to see if a scaled-back or completely virtual convention will affect voter enthusiasm or stymie the next generation of political up-and-comers in both parties. Fortunately, I don’t have to come up with a solution for creating excitement around a live event in an empty room or outdoors in Florida’s oppressive August heat. (I was a reporter in Florida. It’s not an easy environment in the summer, even without a pandemic.) I just have to cover it.

Twitter has changed how all of us cover the White House, given how much President Trump uses it, not just for saying what he thinks on any given issue but also sometimes to announce policy changes. But it’s also important to remember that most Americans aren’t on Twitter, and despite the platform’s outsized influence on politics, it’s not an accurate reflection broadly of what most people are thinking. Many Americans do get their news from Facebook, however, and better understanding what they are consuming is increasingly important for political reporters. So, overall social media plays a key role in political coverage, and our job in that context is to provide useful and meaningful content that hopefully breaks through.

My colleague, Mike Memoli. I’ve known Mike since we both covered the Obama administration for different newspapers. And while a lot of people in Washington over promise and under deliver, Memoli does the opposite. He’s known around NBC News as the “Biden whisperer” because he’s covered Joe Biden since the 2008 campaign. But he’s as thorough as it gets when reporting on any political issue. The best political reporters cut through clichés and conventional wisdom and recognize that voters make their choices based on a complicated formula that transcends polls and speeches. Memoli takes the time to listen, source up and understand the lay of the land before jumping right in. He’s also a very tolerant work husband.

What’s the best meal/restaurant you’ve been to during past campaign coverage?

I love a good campaign bus tour, and all the food that comes with it. The more remote, the better. There’s no comparison to family-owned bakeries or barbecue in the South. It’s a welcome change for those of us who eat lunch at our desks on most days.