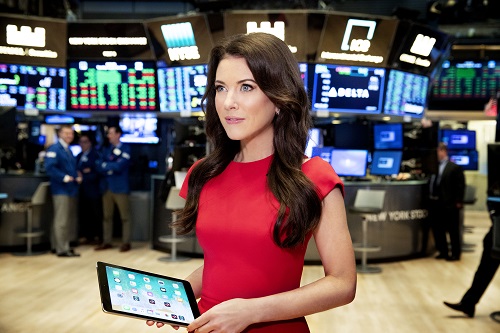 It has been busy start to fall for the AT&T-owned cable news outlet CNN International.

First Move is presented live from the floor of the New York Stock Exchange, and covers the latest market moves in the U.S. and globally.

Chatterley was a notable, under the radar addition to CNN this summer.

She left finance for broadcasting in 2011, and at CNBC International, she went on to co-host Squawk Box, Worldwide Exchange, Street Signs, and various specials.

She then left CNBC for Bloomberg in early 2017, and anchored the daily Bloomberg Markets and What’d You Miss?, covering global politics, business and breaking news, before arriving at CNNI in July 2018.

We caught up with Chatterley recently to find out more about why exactly she left a career in global finance for broadcasting, the impact of Pres. Trump’s comments on the global stage, and how her new show will stand out from other business television fare.

Chatterley: My favorite part of working for Morgan Stanley was the focus on daily events and the discussion about how things like domestic politics and economics impact global financial markets. I spent a lot of time talking to people with far more experience than me, there’s no better way to learn. Then came the real game changer – the Global Financial Crisis in 2008. Suddenly we were all starting again, trying to understand exactly what we were seeing around the world. We are still trying to understand the human and social cost of the GFC and that always mattered more to me. Moving into broadcasting felt like a natural progression. I have now worked as a correspondent all over the world and in places at the epicenter of global market tensions-  places like Greece, Italy, Cyprus, Spain, Russia and Ukraine. I think my market experience gave me a huge advantage in explaining the story and connecting the dots for viewers.

There seems to be some tension right now in regard to global trade. Are you concerned this tension could negatively impact the markets?

I’d argue it already is to a greater or smaller extent. The U.S. equity markets are holding up well, but other markets are struggling – Chinese equities are now in a bear market. You only have to look at the strength of the U.S. dollar versus emerging market currencies, particularly those that are more reliant on exports to the rest of the world or have borrowed in U.S. dollar to understand the fears that persist. I speak to those who are staying away for now, others are already seeing huge opportunities to invest. That’s what make markets.

I guess a follow up to that is: From what you have been hearing, what type of impact do Pres. Trump’s words have on the global markets? He’s obviously a huge deal here…is he as big of a deal abroad?

President Trump leads the most powerful country in the world. His comments will always have an impact but for financial markets, it depends on the subject matter and the timing. There is considerable fatigue I think where trade rhetoric and threats are concerned. It’s tough to price. Then there are Twitter attacks on individual companies. We’ve seen that recently with companies like Amazon and Ford. In the latter case, Ford issued a statement that clarified and effectively corrected the President regarding what they will make and where. It just adds an extra degree of uncertainty. There are some positives here too remember and we shouldn’t forget that. There has been a great deal of market positive policy enacted, tax cuts and deregulation to name just two. As an investor, you take the rough with the smooth.

Who’s your dream interview? He or she could hail from the financial sector, or politics, sports, entertainment, anywhere…

May I have two? President Trump and President Xi. The former on the record and the latter off the record.

Lastly – Give our readers your elevator pitch. Why do you feel First Move is must-see TV on weekday mornings?

First Move is a fast paced, high energy, informative and engaging snap shot of what we call the day’s drivers. Drivers of markets and/or conversation. We aim to cut through the noise, giving you context and perspective on the stories you need to know. Helping the viewer to make their First Move. Bottom line is it’s one hour of me, running around the NYSE at the opening bell, talking biz, finance and politics with a big smile on my face, doing something I truly love!