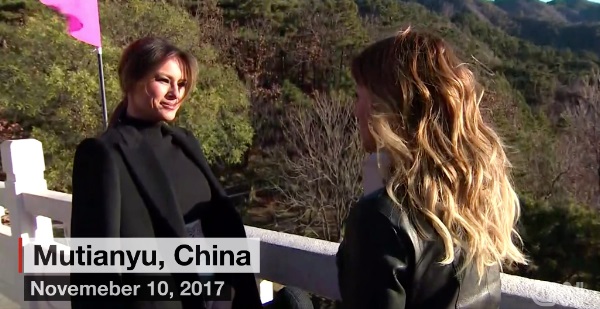 A member of the Trump family agreed to be interviewed exclusively by a CNN reporter. On camera. In 2017.

Mrs. Trump spoke about her six-day trip in Asia, telling Bennett she discussed her platform (helping children live better lives) with the wives of world leaders. “We did exchange what they’re working on and what I will work on and what my passion is,” she told Bennett.

Mrs. Trump also shared what her time as first lady has been like at the one-year anniversary of her husband’s election.

“Well, it’s my honor to be a first lady of the United States, and it was a very busy year,” said Trump. “We love to live in Washington, we have a very busy life. It’s exciting, as well.”

This represents the first time a member of the Trump family has been exclusively interviewed by a CNN reporter on camera in roughly one year. The most recent exclusive appearance by a Trump family member on CNN was when Donald Trump Jr. appeared on New Day in November 2016.

Bennett is a veteran lifestyle journalist who has chronicled the intersection of people, culture, and politics at various outlets for roughly two decades, and her beat at CNN includes covering the First Family, the first lady and the East Wing of the White House.