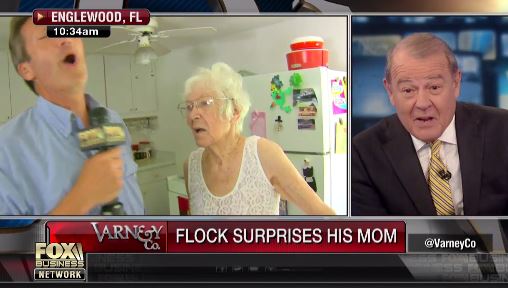 Jeff Flock is making it a habit of running into family members during live shots on Fox Business Network.

Two weeks ago, Flock spotted his daughter, Liz Flock a reporter with PBS NewsHour, covering the aftermath of Hurricane Harvey in Houston. Today, Flock dropped by his 91-year-old mother’s house in Englewood, FL, between Ft. Myers and Sarasota. She didn’t know he was coming. “Aren’t you full of surprises,” she said.

As he wrapped up the live shot, Flock asked his mother what she thought about anchor Stuart Varney. “I don’t like Lou Dobbs,” she shot back. WATCH: