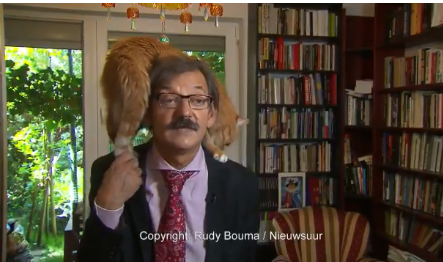 Remember that viral video from last year showing two kids entering their dad’s home office while he was being interviewed live on BBC Global News? Something similar happened over the weekend on a different European news network, though this time a cat was involved and the interview was taped. But the interruption was just as amusing, if not more so.

A Polish professor named Jerzy Targlaski was being interviewed for the Dutch news program Nieuwwsuur (NewsHour) about Poland’s Supreme Court when his feline made a surprise appearance.

Somehow, Targlaski was able to keep his composure as the camera kept rolling.

Rudy Bouma, a current affairs reporter for NTR (Dutch public TV), tweeted out the video with the caption: “The Polish historian & political scientist Jerzy Targalski remained completely unruffled during our interview when this happened.”

Just a fun, little story to brighten your Monday.