NEXT:Don Lemon Is Being Sued by Man Over Alleged Assault Last Summer at a Hamptons Dive Bar
PREVIOUS:Scoreboard: Tuesday, Aug. 13 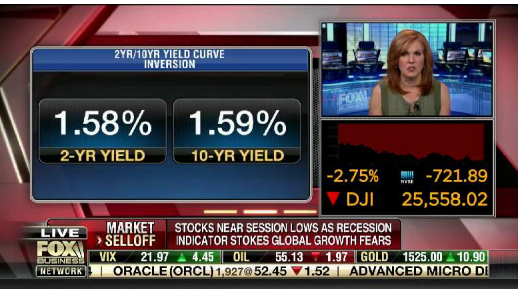 The stock market has been extremely volatile lately, and today was another extreme example.

Stocks accelerated their declines in afternoon trading today after economic indicators from Germany (the world’s 4th-largest economy shrank in the second quarter primarily due to auto sales problems) and the U.S.-China trade war, brought fears of a recession here in the U.S. and abroad.

The Dow was off as many as 801 points this afternoon after the bond market, or roughly 3.05%. That’s the Dow’s largest drop of the year.

This could mean a recession, despite a strong U.S. economy, low unemployment rate, and high consumer spending.

As natural disasters are huge events for The Weather Channel, market catastrophes like these are significant for the business news networks. Outlets like Bloomberg, CNBC and Fox Business will be receiving more eyeballs than usual, and it’s essential for them to be at their very best.

FBN’s Liz Claman, who anchors The Claman Countdown during the network’s 3 p.m. hour, anchored the close of the markets commercial-free as well.

“I get in a zone where minute by minute things are shifting and changing,” Claman told TVNewser after her broadcast. “I came from local news where we’d go for hours and hours during breaking news stories. I remember when I was an anchor at WHDH in Boston, I sat on the set during a massive snow storm and anchored for about 4 hours straight. At some point someone tossed me a pop-tart but that was about it for any kind of break. But business news is a whole different ball-game. You’re looking at a jam-packed computer screen with rolling breaking business news headlines while dozens of sectors, stocks, bonds, currencies and commodities are constantly changing direction. You really have to be good at splitting your brain: part of you is interpreting that, another part is tossing to a reporter while you’re getting guidance from your executive producer and your line producer, and today for example, I was booking a guest in the middle of the show because he’s a billionaire investor and I wanted our viewers to get the perspective of someone who’s made a lot of money during crazy times.”

FBN is going to lose revenue when it blows through commercial breaks. Make-goods will come later, if at all. Does Claman see that as a problem? Is there a general strategy behind blowing out these ad breaks?

“It’s not a strategy. It’s a commitment to the viewer,” she said. “On a day like this, the Dow or the Nasdaq can gap down in the blink of an eye.  You wanna be in a commercial break when that happens? That’s not serving your business news viewer. I’m grateful that Fox Business allows me to go all-in at the risk of forgoing commercial breaks. It pays off in the end. Our viewers stick with us.”

Claman also explained how this market decline is different from the previous Monday’s, calling it “a different type of stock tsunami,” and added, “Before our markets opened, Germany announced its economy contracted in the second quarter. If the Eurozone’s most vibrant economy is shrinking, investors here are going to wake up on the wrong side of the bed. Add in the fact that we’re looking at a protracted trade war and stocks were swamped at the open. Did I expect that in my hour the Dow would fall 800 points? I’m not sure anyone did.”

This is the second time in the past nine days that multiple business news networks have gone commercial-free for extended period of time, another indicator of the volatile markets in 2019.  On Aug. 5, The Dow experienced a whopping 767-point drop (or 2.9%), the S&P 500 (-3%) and Nasdaq (-3.5%) also closed at two-month lows, as President Trump accused China of manipulating its currency in the trade war.

To drive home the importance of that story, CNBC decided to go with only one commercial break from 9:30 a.m. through 12 p.m. ET, and went through the closing bell without another. The network also aired a live special about the volatile markets in the 7 p.m. ET hour.

Fox Business had eliminated commercial breaks from 1 p.m. ET until after the closing bell (4:40 p.m. ET) due to the breaking news.

One of the more interesting soundbites came in the morning, when President Trump’s Commerce Secretary Wilbur Ross appeared on CNBC and explained to the folks at Squawk Box the administration’s decision to delay new tariffs on China by saying, “Nobody wants to take any chance of disrupting the Christmas season.” (Christmas and Hanukkah are more than four months away).

As it did nine days ago, CNBC is airing an hour Special Report tonight in the 7 p.m. hour: Markets in Turmoil, anchored by Melissa Lee live from the Nasdaq. (Pre-empting a re-run of Jay Leno’s Garage.)

Throughout the hour, Lee will be joined by an array of traders, including Fast Money’s Guy Adami, as well as Jim Cramer, who will take calls from viewers. CNBC’s Asia bureau will provide live updates, and CNBC’s Washington D.C. Reporter Eamon Javers will offer reaction from the White House. Additionally, CNBC correspondents will supply reports on important sectors including Tech, Oil and Housing.

But it’s not all about CNBC and Fox Business right now. Bloomberg TV started special coverage of the markets when the yield curve inverted in the 6 a.m. ET hour today and adjusted all shows to cover the selloff extensively throughout the day. The network showcased its team of markets reporters and also included guests including investor Mario Gabelli of Gamco, bond fund manager Dan Fuss of Loomis Sayles, Janus Co-Head of Global Bonds Nick Maroutsos and former Pimco CEO/current Bloomberg Opinion columnist Mohamed El-Erian. Markets coverage is continuing with live programming in Asia, starting with Daybreak Australia as we lead up to the Asian markets open.