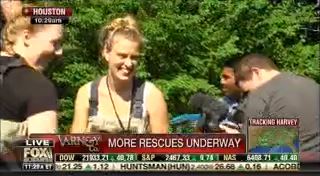 FBN anchor Jeff Flock was doing a live report during a rescue effort in Houston this morning when he happened to pass by his daughter, Liz Flock, who is also there, reporting for PBS NewsHour.

Jeff Flock was reporting live on Stuart Varney‘s show when he paused mid-thought: “That is my daughter, she is waving. I’ll be darned, isn’t that something?”

They both knew the other was in Houston, but hadn’t had a chance to connect.

“That’s my daughter. I’m very proud of her. Elizabeth Flock. Look her up on the internet,” Flock said later. “She’s a good journalist, unlike her dad who’s just a hack!” WATCH: