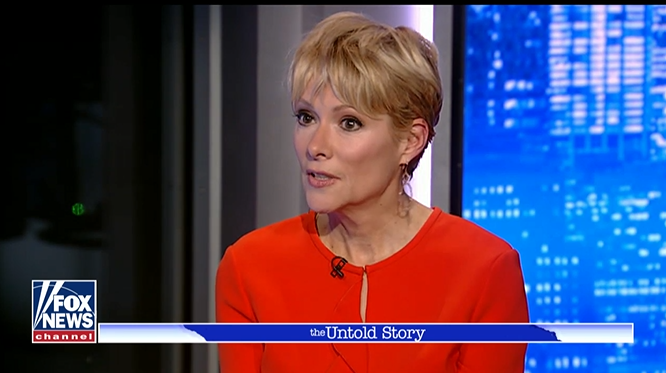 FBN’s longtime personal finance reporter Gerri Willis Willis was diagnosed with stage three breast cancer in April 2016, and has lived to tell the tale. The TV newser has been honored by the Susan G. Komen foundation for her work spreading awareness of this horrific disease. In fact, she was honored at the organization’s Surviving with Impact award at the 2018 Impact Awards.

It appears that Willis will now have to fight another form of cancer. This time, she’s been diagnosed with cervical cancer caused by HPV.

Willis, who joined Fox Business in March of 2010, is starting a leave of absence from the network today and she wrote an op-ed to help shine a light on the virus and how it can affect women years later.

I’m writing ahead of another surgery. This feeling of anticipation and not a little anxiety is all too familiar — and so is the culprit. Cancer.
In this case, more pre-cancer cells have been discovered on my cervix. I told you about my struggle to contain these cells just a few months after my doctor found them late last summer. I thought a simple cone biopsy had removed them. But as luck would have it, the virus that is creating these cells, HPV-18, is still in my body and creating more of these problem cells.

I decided to share my experience for two reasons. One, the HPV infection can be prevented with a simple inoculation of Gardasil. The CDC recommends children aged 11 to 12 receive the shots. That’s a solution as simple as a trip to your primary care physician’s office to protect your kids.

But the other reason I wanted to share my story is that HPV is as common as rainwater. The CDC says that nearly all American men and women will get some strain of HPV in their lifetime. That’s a lot of ticking time bombs. The good news is that most of these strains are harmless. But for a few of us who contract HPV, one of nine cancers threaten. HPV is the culprit in 35,000 cancer cases diagnosed every year. More than 9 of 10 cases of cervical cancer are caused by HPV.

For me, the next steps are straightforward. I’ll have a hysterectomy this week. My bosses at Fox are giving me the time I need to recover and heal before getting back into action down at the New York Stock Exchange.

I am upbeat and optimistic because this surgery is preventative. I’m in front of the curve this time in my fight — being treated before an actual cancer has time to develop.

So, I’ll see you in a few weeks. Don’t worry. We’ve got this. But do me a favor, take care of yourself and your family. HPV is a cancer you have tools to fight.

TVNewser wishes Willis the best of luck as she embarks on her next battle with cancer.