NEXT:Sunday Shows: Q1 2017 and March 26
PREVIOUS:ESPN Is Planning to Be More Like Netflix 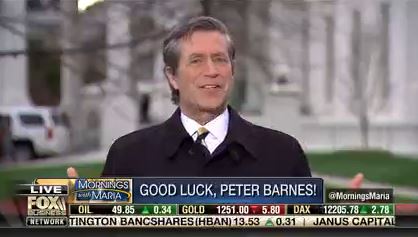 Peter Barnes, who was one of the original anchors at Fox Business Network, is retiring from TV news.

Maria Bartiromo gave Barnes a send-off, playing a reel of some of his biggest moments with cameos from his colleagues, and highlighting his 10 years at FBN covering “the worst financial crisis since the great depression, aggressively covering three presidents, two federal reserve chairs and a sometimes chaotic congress.”

“Peter, I’ve certainly loved working with you here at Fox Business Network and before that, at CNBC,” said Bartiromo.

“You are getting me. I had no idea this was coming,” said Barnes, who is moving to Boston. “My wife took early retirement, we have a lot of family up in the Boston area,” said Barnes who added that while he’s “retiring from TV news he’s not retiring from work.”

“I just want to thank all my colleagues here, the best group of people that I have ever worked with,” said Barnes.

“I wish you all the best my friend,” said Bartiromo.