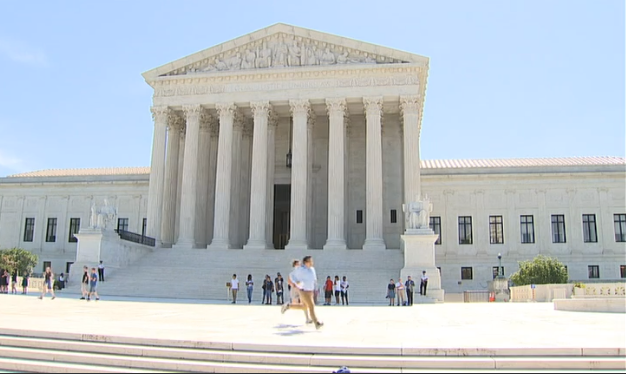 It has been a busy day in Washington, as one TV news network intern experienced first-hand.

The U.S. Supreme Court handed down two opinions that will ultimately transform this country for years to come. It was news Fox Business College Associate Jack Lee deemed worthy of running down the steps of SCOTUS building to deliver to FBN White House correspondent Hillary Vaughn.

Lee is a rising Junior at the University of Missouri. He provided us with the back story:

I found out that I would be running the opinions from the Supreme Court to [FBN correspondent] Hillary Vaughn. I’ve heard of the “running of the interns” where broadcast staffers run Supreme Court opinions to the reporters outside waiting to do live shots, but it didn’t immediately click in my head that I would be taking part in this tradition.

We got to the Supreme Court around 9:30 p.m. and were given a quick run-through of what to do. We were expecting the first of the opinions to come down around 10 a.m. There were probably around 10 people from different networks in the hall waiting for opinions, and while we were chatting, some people mentioned past years where runners fell down the stairs or ran past their reporters. I started to get nervous, but soon after, the first opinion [Rucho v. Common Cause, the gerrymandering case] came down.

As soon as [producer] Bill Mears handed me the opinion, I had to start speed walking [running isn’t allowed in the halls] to the door. While I was walking I looked at the opinion to see which one I was holding so I could let Hillary know when I handed it off to her. As soon as I got outside the door I started sprinting. Once I was running, the only thing I was thinking about was getting to Hillary as soon as fast as possible and handing it off. That part was a blur – I do remember some people yelling at me to ask what decision I had in my hand, but I was too focused on my task to really be able to respond.

I didn’t really think about what I was doing until after I had handed off the opinion to Hillary and turned to go back inside. When I turned back, I looked up the stairs that I just ran down and that was when the moment really sank in. It’s such a well-known tradition within the broadcast world, but beyond that I was able to help Fox Business get the court’s decision to air as quickly as we did.

It’s presently 94 degrees (Fahrenheit) in Washington, so props to Lee for making the mad dash today.