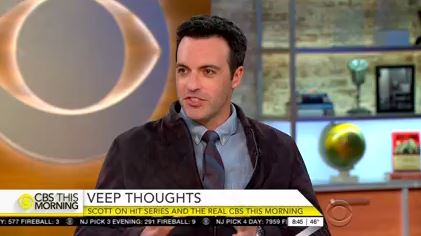 TV shows that include TV news in their storylines are usually set at fictional outlets. See: Mary Tyler Moore‘s WJM-TV, Newsroom’s ACN, Murphy Brown’s FYI, and the new NBC show Great News which is set at a cable network called MMN (with a logo that looks suspiciously like CNN’s). But Scott’s Veep character, Dan Egan, is a co-host of a real show: CBS This Morning.

So he went on the show this morning to talk about it.

Charlie Rose asked Egan what the inclusion in the storyline says about morning TV. “One of the fun things we discussed in early days of Veep is that it’s a workplace comedy. It could be any industry. It was making light of politics and the obvious connection between politics and the world of broadcast journalism.”

The fake news anchor also read a real news headline, naturally, from the world of media.