The three evening newscasts don’t air in prime time, yet all three: NBC Nightly News, ABC’s World News Tonight and the CBS Evening News, were all Top 10 shows on TV last week. With summer setting in TV viewership is moving away from the broadcast schedule.

As a result, World News Tonight with David Muir was the No. 3 show last week, after competition shows America’s Got Talent and World of Dance. Nightly News with Lester Holt was the No. 4 show. And in his last week of anchor of the CBS Evening News, Scott Pelley averaged just shy of 6 million viewers, enough to make it the No. 10 show of the week. 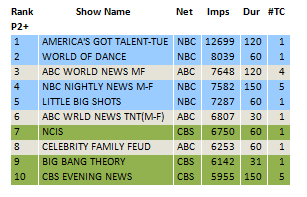 As Holt explained to us yesterday: “I still look at the daily ratings for the three networks with over 20 million people watching, which is astounding. Not a lot of programs can claim even 7 or 8 million viewers a night,” he said.

Last week 21.1 million tuned into the evening newscasts, but that’s down from 22.3 million the same week last year. Among the younger demo, all three were down double digits: ABC down -12 percent, NBC down -13 percent and CBS down -19 percent.

Numbers for the week of June 12: