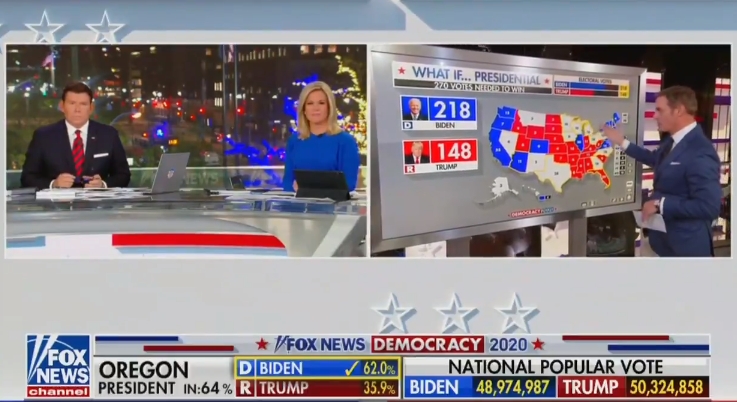 Welcome to the election night 2020 live blog, part two. (You can find part one here.)

The president has held serve in all of the states he won in 2016 … up until 11:30 p.m. ET, when the Fox News Decision Desk called Arizona for Joe Biden.

The moment that Fox News called Arizona for Biden, which occurred while anchor Bill Hemmer was at the big board gaming out scenarios. pic.twitter.com/H8JbN0G31j

Fox is the first network to call the Grand Canyon State for either candidate.

“To use the sports metaphor, this is the first break in service,” said Fox News Sunday anchor Chris Wallace, showing off his tennis acumen. “This is the first time that a state that the Democrats had won in 2016 or the Republicans that won in 2016 has flipped to the other side, Arizona. Donald Trump beat Hillary Clinton.

Now Joe Biden has beaten Donald Trump. Now it’s 11 votes, which is not nothing. It’s not a huge state, but it’s obviously important. And it would conceivably make up in case if Biden were to lose one of one of the Democratic states. I would say it’s a significant victory for Joe Biden. As I say, the first flip of the night in the presidential race.”

The decision surprised a number of media personalities, and angered Trump supporters and campaign officials:

WAY too soon to be calling Arizona…way too soon. We believe over 2/3 of those outstanding Election Day voters are going to be for Trump. Can’t believe Fox was so anxious to pull the trigger here after taking so long to call Florida. Wow.

The state’s Republican governor is speaking out too:

It’s far too early to call the election in Arizona. Election Day votes are not fully reported, and we haven’t even started to count early ballots dropped off at the polls. In AZ, we protected Election Day. Let’s count the votes — all the votes — before making declarations.

Rewinding to the top of the 10 p.m. ET hour, and to piggyback off the previous post’s headline, while Biden may have won Arizona, it appears Trump is on his way to winning “Florida, Florida, Florida.”

MSNBC’s Nicolle Wallace creatively put it: “It is a state that has been increasingly difficult for Democrats to win in statewide. You can feel the hopes and the dreams of our viewers falling down, and you can hear liquor cabinets opening all across this great land. But Florida wasn’t a state the Biden campaign was counting on, Florida wasn’t a state essential to a Biden win.”

But, as a certain ESPN college football analyst (and native Floridian) Lee Corso likes to say: “Not so fast, my friends …”

.@LacraiMitchell says there has been a report of an internet outage in Osceola County, Florida, which could cause a delay in when election results are announced https://t.co/Te86vJczcW pic.twitter.com/9clTod2wTs

PATHS TO 270: How could Joe Biden or President Trump score a White House win based on where the votes stand now? @MajorCBS walks through how the rest of the race could play out #Election2020 https://t.co/fxHKy8hSEp pic.twitter.com/xAdTjedt13

While Trump appears to be on the road to winning Florida, and a lot of other states have been called, a fair number of newsers are preaching patience.

“Everyone needs to take a deep breath out there,” said CNN’s Jake Tapper. “Whether you’re rooting for Biden or for Trump, this is far from over.”

Patience is a crucial virtue. History shows that it’s much more important to count the votes accurately than to do it fast.

Tapper later adds: “As they say, you can’t get high on your own supply,” an homage to Notorious B.I.G. (Tapper’s instructing pro-Biden viewers not to exclusively listen to pro-Biden talking heads).

I think we can all agree the polling industry is DEAD. thank you. #Election2020

New polling data says the favorability of pollsters is plummeting.

“While it looks like @JoeBiden has a lead, they count a lot of votes early,” @jdickerson reminds voters. He notes a change in the Republican party within the state: “They see their future with Donald Trump” pic.twitter.com/yyVsT5qgzE 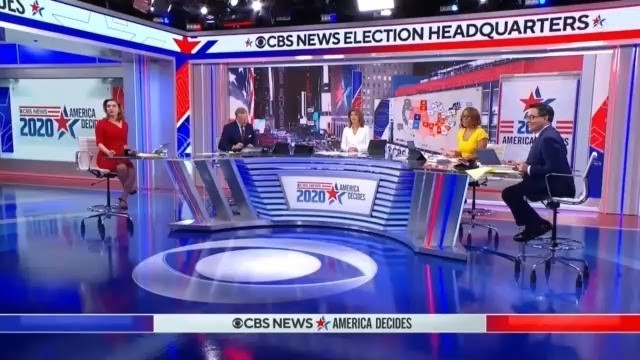 The election night live blog continues with part three, which you can find here.