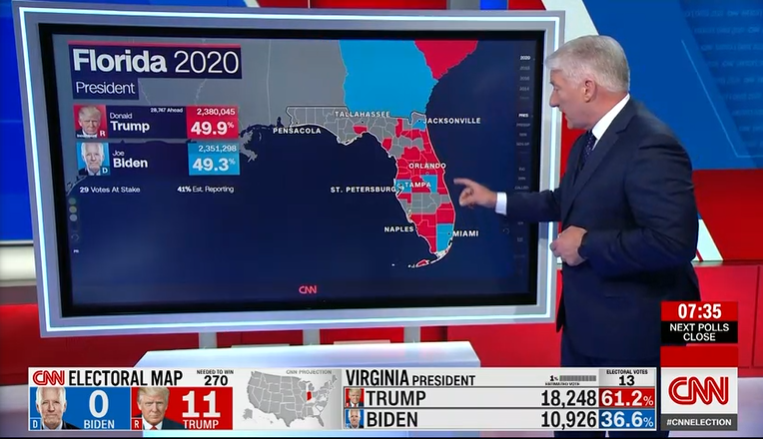 After years of campaigning, a presidential impeachment, a worldwide pandemic and an extraordinary amount of anticipation, election night 2020 is finally here.

Will President Donald Trump be reelected for a second term, or will former vice president Joe Biden become president-elect Joe Biden? Political polling juggernaut FiveThirtyEight (now owned by ABC News) has Biden with a 90% chance of winning both the popular vote and the electoral college.

You never know what will happen tonight, and into Wednesday morning. It appears the 2020 election will draw record voter turnout, including a preponderance of early and/or mail-in voting, which will make counting and covering the vote total extremely complex for television news networks.

Unless it’s an absolute blowout, this election probably won’t be decided until Wednesday, making for more heavy lifting for the executives in charge of TV news network election coverage.

“While we can’t predict what will happen or when, we are prepared for both election night and after,” said MSNBC senior ep Pat Burkey, the exec in charge of MSNBC’s coverage tonight. “We are staffing up and will continue to cover the latest developments in the most aggressive way possible. For example, we’ve bolstered our team of experts in election law led by Ari Melber, including experts in vote counting and those who can help us figure out the most complicated and unpredictable of storylines and how they might unfold state by state. They’re all on call and ready to help us explain scenarios we’re not even imagining yet.”

The networks released their respective coverage plans over the past couple weeks.

Wolf Blitzer opened CNN’s election coverage at 4 p.m. ET: “Welcome to our viewers here in the United States and around the world. I’m Wolf Blitzer in the CNN Election Center. Right now, voters are in the final hours of making a monumental decision for this country about who will lead us through the next four years: Former vice president Joe Biden, or President Donald Trump. We are counting down to the first results from our exit polls—in about an hour we will get an early read on what voters are thinking as they cast their ballots. Buckle up for a suspenseful night. Voters in all 50 states are having their say in the heated fight for 270 electoral votes, the number needed to win the White House. Fourteen of those states are competitive battle grounds that will ultimately decide the election …”

Brian Williams opened MSNBC’s coverage at 6 p.m. ET: “Here we go, 6 p.m. in the East and we’re underway. Americans have been voting for days setting records and still voting at this hour in what is a titanic struggle for the future of our country. It will now be decided during an uncontrolled pandemic in our country, which explains the 100 million plus votes that are already in.

Brian Williams here with you from our NBC News Global Headquarters in New York, joined by my colleague and friend Rachel Maddow at the far end of our expanded studios. Rachel?”

Maddow: “Thank you, Brian. Nicolle Wallace and Joy Reid are here my by side in our corner of the studio at a physical distance that belies our emotional closeness. I got to come up with a different one every night. Our election night mvp Steve Kornacki is at the board standing by for the forced results, that are starting to come in tonight …”

Baier: “Welcome to Fox News World Headquarters in New York. After months of campaigning, virtual conventions and two contentious debates, we are now less than one hour away from the first poll closings of 2020. Welcome to our coverage of democracy 2020, the presidential election. I’m Bret Baier.”

MacCallum: “I’m Martha Maccallum. It has been a campaign year like no other as a pandemic leaves its mark on every aspect of life and the election. The virus has hit millions of Americans and taken the lives of more than 200,000. The shutdown of our economy and the closing of schools, all of it, have a fit burden for families coast-to-coast …”

But first, Fox News calls Kentucky for Trump, and both Virginia and Vermont for Biden. CNN also has Trump taking Indiana, but says it’s too early to call Georgia, Kentucky, South Carolina, Vermont, Virginia. MSNBC also has Indiana for Trump. The AP calls Vermont for Biden.

The broadcast networks have joined the action.

“We are tonight putting together an enormous jigsaw puzzle but we don’t have the box that has the picture on it,” @jdickerson tells @NorahODonnell of what is to be a long night of #Election2020 returns pic.twitter.com/z2jyoyPd33

.@GStephanopoulos: “Counting could take some time this year—and that is okay. Not knowing the outcome tonight does not mean the process is broken. It does not mean the election is unfair.” https://t.co/GwwRl4EUb3 #ElectionNight pic.twitter.com/fkcat7XXo6

President Trump will defeat Joe Biden in West Virginia, one of the most pro-Trump states in America. #democracy2020 #foxnews

7:30 p.m. ET: North Carolina and Ohio are too close to call. CBS News has called Vermont for Biden. CNN has yet to call West Virginia for Trump, surprisingly. In fact, CNN has called only Indiana as of 7:45 p.m. ET. No other states yet.

Everyone has virtual graphics of some kind or another tonight—even historically sober CBS News, which brought in former CNN production executive David Bohrman to produce this event (Bohrman of CNN “Magic Wall” and election night hologram fame).

8 P.M. UPDATE: CBS News is characterizing the presidential races in both Pennsylvania and Florida as a toss-up pic.twitter.com/o6wsT1MRyB

“I covered the Trump campaign back in 2016 when it was a come-from-behind win,” NBC News White House correspondent Hallie Jackson recalled. “I vividly remember election night with all of you that night as well. There is the memory of that that is still lingering. The sense that this campaign has been an underdog before and could be an underdog and pull out another victory again. But there are also those close to the president who are looking at the way suburban women, for example, seniors have moved away from the president largely because of questions about his handling of the coronavirus pandemic and that I think has given some folks pause tonight.”

NBC News Capitol Hill correspondent Kasie Hunt added: “The area around Jacksonville—I was actually just exchanging notes with a couple sources about what’s going on there because some Democrats have noticed that the early results seem to be stronger for Biden than maybe anticipated. But I’m also told by others who have been tracking this data very closely that they’re not sure that Biden is going to pull it out. So, I would urge a little bit of caution in terms of looking at the returns there.”

The U.S. election is the dominant global story tonight, and here’s how it looks on some international networks, including the BBC: 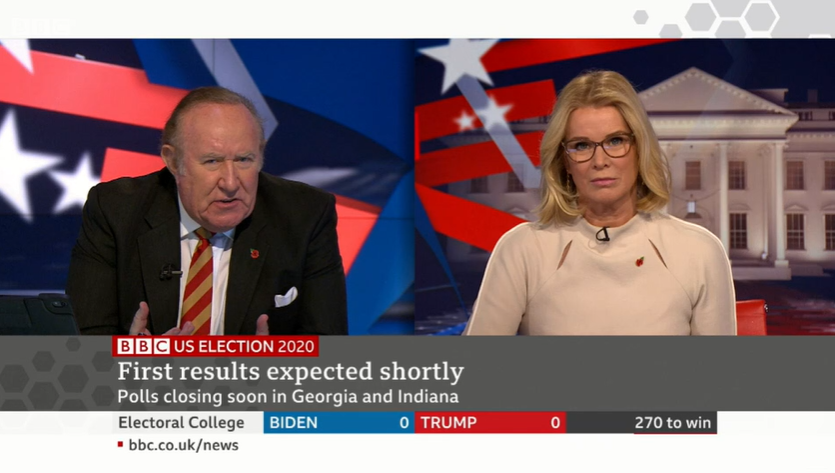 And on Al Arabiya: 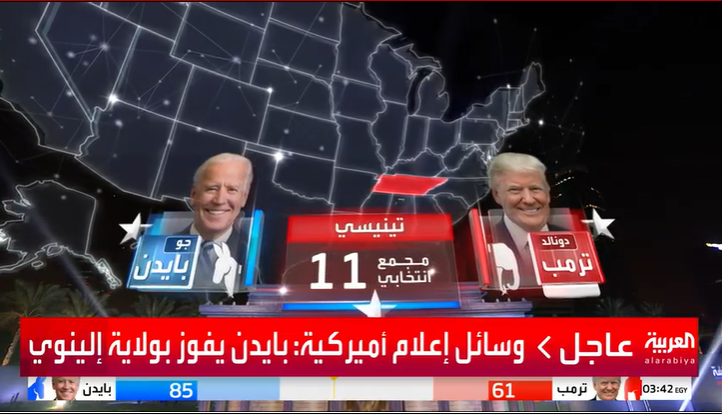 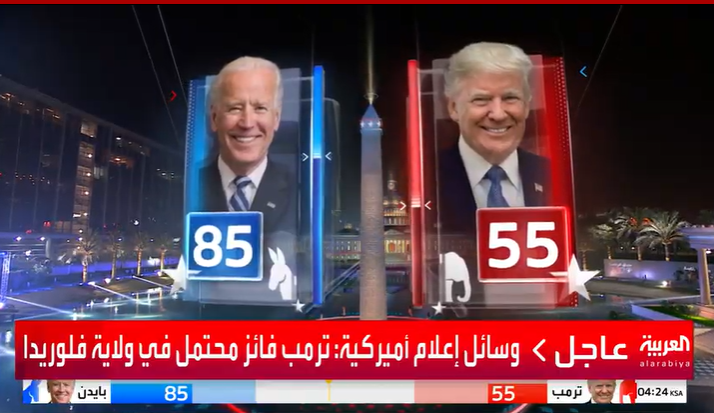 No other outlet has reported this, however.

Burgers and fries now being served at the White House as the party watches Fox.

At least one TV newser isn’t impressed with the polling:

Biden campaign on the reality of the Florida race:

Biden campaign official to @NBCNews: “We always said Florida was going to be close, and it is. We also said we didn’t have to win it and that’s still true.” – @mikememoli

Texas Republican senator John Cornyn is the projected winner in his senate race, as are Mike Rounds from South Dakota, Cory Booker from New Jersey, Jim Inhofe from Oklahoma.

On a totally different note, Calm, which is an app “for sleep, relaxation and meditation,” is a sponsor of CNN’s coverage. Brilliant.

The CNN KEY RACE ALERT is sponsored by the Calm app lmao pic.twitter.com/MSg3FYBFyK

We’re going to need to stay patient with Michigan, says one NBC Newser:

#BREAKING: With polls closed in ALL of #Michigan (even the U.P.), the first few Detroit ballot boxes are being wheeled into Ford Field (Go Lions) for a final check.

Exciting, but it’s still going to take DAYS for a full picture of the Great Lakes.#Election2020 @NBCNews pic.twitter.com/CsvXqmaozv

Fox News has been by far the most aggressive news outlet when it comes to projecting winners. Here’s what it did during the 7-10 p.m. ET time period:

Interestingly, Fox News called Virginia for Biden at 7 p.m. ET, but other outlets are still showing Trump ahead in the state … at 10 p.m. ET.

Click here for Part 2 of the election night live blog.