“My client, Ed Henry, is a journalist’s journalist who won the top award for excellence in White House coverage twice, so he reluctantly brings this action,” Henry’s attorney Ty Clevenger said in a statement. “But there is no excuse for sloppy, reckless journalism that smears him or anyone else. CNN and NPR will be held accountable for what they’ve done to Ed, and given their animosity toward Fox News, I suspect they will be serving a lot of interesting subpoenas on Fox.”

“When Mr. Henry’s termination was announced on July 1, 2020, Mr. Folkenflik published a story on the NPR website that made false or misleading statements about Mr. Henry. Mr. Folkenflik’s claim that ‘Fox’s top news exec and & top HR official were warned [in 2017] that giving Henry hosting roles would damage reform efforts after harassment scandals there’ was completely false. Fox has since declared publicly that the company received no sexual misconduct complaints about Mr. Henry before Ms. Eckhart’s allegations in June of 2020.” 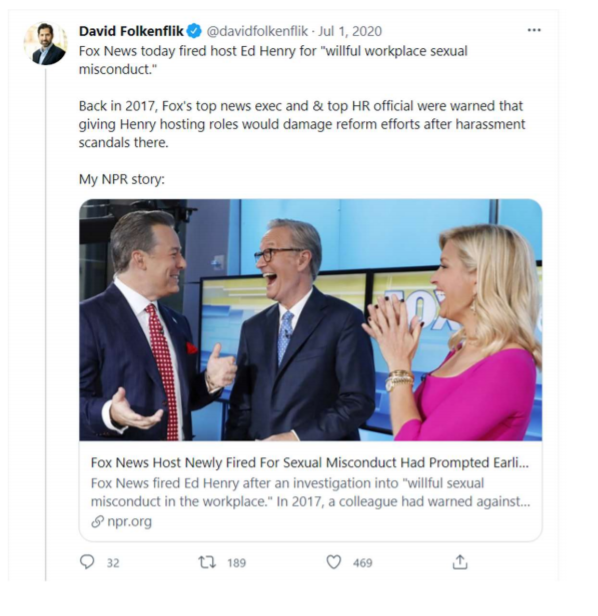 The complaint also details Stelter’s appearance on CNN New Day (when Camerota still co-hosted that program) in July 2020, where he analyzed Folkenflik’s reporting, and added that Henry “was known to be a problem internally.”

When reached for comment, NPR’s executive director of media relations Isabel Lara told TVNewser: “NPR stands behind David Folkenflik’s reporting and will vigorously defend it against this meritless claim. Millions of Americans trust NPR to provide accurate information about the world and their communities every day; we take this responsibility very seriously.”