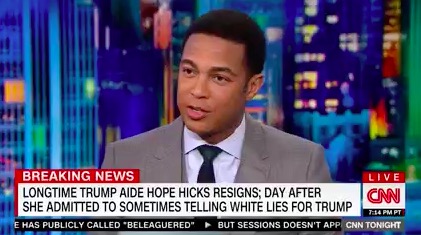 If you were watching MSNBC last night you saw a lot of news about Hope Hicks.

If you were watching Fox News, you’d have seen less of it.

As he covered the story on CNN last night, Lemon said, “I was sitting in my office and was watching all the news channels– Trump TV or state-run TV, they’re not even reporting this,” Lemon said referring to Fox News. “So, Trump supporters, they don’t even know about these stories, it doesn’t even register, that’s the amazing thing.”

FYI.. Last night, in an attempt to make a broader point about Fox News prime time I misspoke. I should have been more specific.

But even that didn’t sit well with Roberts who added, “Aaaaactually……..We had a report on Hick’s departure on Tucker’s show last night….which is in prime time…”