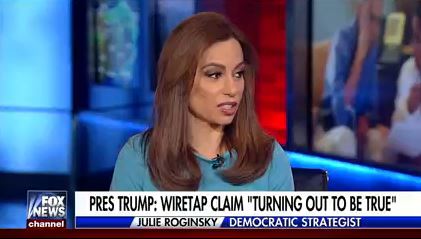 A day after filing a sexual harassment and retaliation lawsuit against Fox News and former CEO Roger Ailes, Democratic strategist and Fox News contributor Julie Roginsky was back on the network today, twice.

Roginsky was a guest on America’s Newsroom this morning with Fox News contributor Rachel Campos-Duffy, the one-time Real World castmember who is married to Rep. Sean Duffy (R-WI). This evening she was the First 100 Days. Both segments were about the latest angle in the surveillance story and former National Security Adviser Susan Rice‘s part in it.

The issue of her lawsuit, naturally, did not come up. But after her morning show segment, Roginsky thanked fans for their support:

Thanks everyone for watching and sharing your support. It means the world to me. Looking forward to future segments on @AmericaNewsroom. pic.twitter.com/VLYkIqkNQd