He may be polarizing, but Tucker Carlson is still quite good for business.

Despite multiple boycotts initiated against the show and its host since 2018, the combined average cost for a 30-second unit on Fox News’ 8 p.m. show Tucker Carlson Tonight has managed to nearly double year-over-year, according to a recent study performed by the New York-based media cost research & analysis company, SQAD. 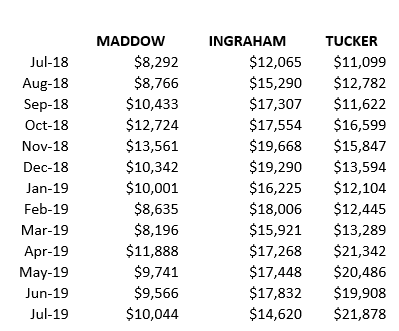 By comparison, according to SQAD MediaCosts: National data, during the same time frame, the combined average costs for a 30-second unit on The Ingraham Angle and MSNBC’s The Rachel Maddow Show showed only modest increases. 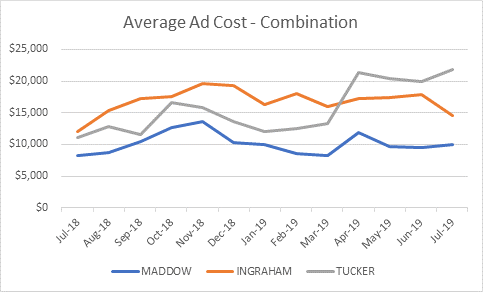 Yes, a number of advertisers have pulled their commercials from the Tucker Carlson Tonight, and reports state that the number of in-house promos has greatly increased in recent months. However, according to SQAD, it appears the brands that are staying with FNC’s 8 p.m. hour are getting access to a group of fiercely loyal consumers who may find that a brand which has the “courage” to stick with Carlson to be worthy of their exclusive business.

Tucker Carlson Tonight has been the No. 2 cable news program in recent months, and was one of the few highly-rated cable news shows to post year-over-year growth in total viewers in Q2. It has dominated the 8 p.m. hour since launch.

Says SQAD, bottom line, it appears that the boycotts are not making a significant financial impact on the network (because committed ad dollars from boycotting brands are just being rerouted to other shows on the network.) And, those advertisers that stick with the host, pay a premium to reach the newly concentrated viewership.