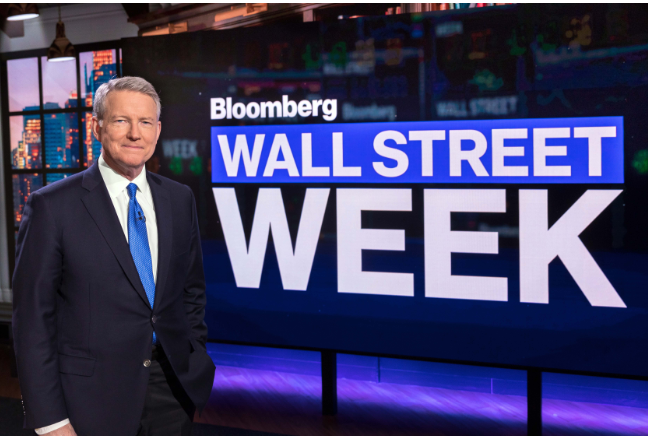 One of the most popular programs in business TV history is back.

David Westin will anchor the 1-hour weekly program, and he’ll be joined by a rotating panel of influential voices including thought leaders, CEOs, policy makers and economists engaging in discussions about the markets and geopolitics.

The Bloomberg version of Wall Street Week is going to build on the foundation set by the original Wall Street Week with Louis Rukeyser, which was conceived and produced by Maryland Public TV and aired on PBS Fridays from 1970-2005.

“This is a version of an icon, but it’s a different version,” Westin told TVNewser. “It’s not just a TV program. It’s on radio. It’s a podcast, and it will exist through the week on social media in various ways, and will include some of our regular contributors tweeting and posting blogs having to do with Wall Street Week. So, it will exist in the 21st century, but still try to capture the essence of what made the original Wall Street Week.”

Westin is an exec-turned-talent. He was the president of ABC News from 1997-2010, and joined Bloomberg TV in June 2015 as co-anchor of the network’s morning show. Now, he’s moving to Friday nights and is very excited to be taking the reins of this iconic business news franchise.

“The essence of the program is to have a time once a week, when you come together and think about the major 2, 3 stories of the week that affect business, finance, the economy, and have some voices that you really want to hear from,” Westin added. “People who are really experienced, are very intelligent, who can bring a different perspective.”

Westin spoke with us on Thursday not only about the new Wall Street Week, but also about how he’s covering presidential candidate Michael Bloomberg, and if he ever channels his past life as a TV news executive as Bloomberg TV endeavors to break through this cutthroat business news landscape.

TVNewser: Tell me about the production process for Bloomberg Wall Street Week? Had this been in the works for a while?

Westin: Yes, we’ve been working on it for some months now. It’s something that Al Mayers, who runs global TV and radio here, came up with. He came to me some months ago and told me “we’d love to do this and we’d love for you to host it, but we need to make sure we get the very best people who will be participating on a regular basis.” That’s what we’ve been working on in terms of putting it together.

You were the ABC News president for nearly 14 years (1997-2010) before moving in front of the camera. Business TV news is very competitive right now. How often do you find yourself putting on the news executive cap and strategizing how Bloomberg can break through?

I have a full-time job, but obviously you can’t divorce yourself from what you’ve done in the past and what you know. It’s interesting – When you move in front of the camera, you realize how all-consuming that process is. The preparation, and being on the air and being in the moment and listening to what’s being said and trying to move the conversation forward is really consuming. So, you don’t have much excess capacity to be thinking about administrative issues.

John Micklethwait, the editor in chief here, wrote a memo when Mike Bloomberg first announced his campaign, which laid out exactly how we were going to handle it, which is we’re covering the campaign the way we’d cover the other campaigns. When it’s the news, that we cover the news straightforwardly, and we always disclaim at the end of a segment that in fact Michael R. Bloomberg does own majority interest in the company.

What do you think about the Trump campaign and the Bloomberg campaign both buying ad time in the Super Bowl?

Well, I’ll put my [executive] hat on. Way back before I was at ABC News, I was president of ABC Television Network. I can tell you that it’s good news for the sales departments. When you get more people buying more ads, that tends to help the ad sales.

Have you read the [Disney chairman] Bob Iger memoir?

I’ve talked to Bob about it. This is what I said to Bob actually: All the reviews that I saw were favorable, and as far as I could tell, they were right. He’s very capable, very able, a very decent man. He’s done a superb job there and he deserves the accolades he’s getting. That’s exactly what I said to Bob.

Lastly, the elevator pitch: Why should our readers tune into Bloomberg Wall Street Week every Friday at 6 p.m.?