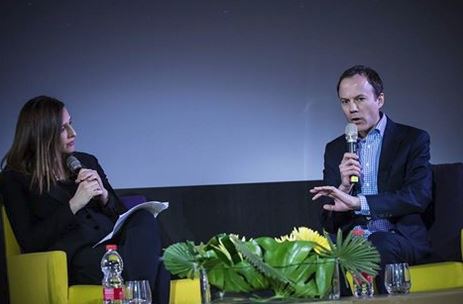 There is no air date yet for Anderson Cooper‘s 60 Minutes interview with adult film star Stormy Daniels because “there’s still a lot of journalistic work to do,” says CBS News president David Rhodes.

Rhodes made the remarks at the INTV conference in Jerusalem Tuesday, moderated by Yonit Levi, anchor of Israel’s top prime time news program.

Daniels filed a lawsuit against Pres. Trump last week, arguing the NDA between her and the now-president regarding their alleged 2006 affair is not valid because Trump never actually signed it. Trump’s personal lawyer Michael Cohen threatened to file an injunction to block the airing of the interview, which took place last week. Cohen admits he paid Daniels $130,000 to not talk about it, a settlement she has now offered to pay back in exchange for her freedom to speak out.

Rhodes’ remarks come as The Washington Post is preparing a story on the network that documents what led to Charlie Rose‘s firing from both CBS and PBS back in November. Insiders tell us The Post has been working on the story for several weeks and has interviewed dozens of people. We’re told Rhodes has spoken with CBS Newsers preparing them for the publication of the story, telling them it could involve current and former CBS News staffers.