NEXT:Scoreboard: Wednesday, Sept. 26
PREVIOUS:Ted Turner on CNN: 'I Think They’re Stickin’ With Politics a Little Too Much ...' 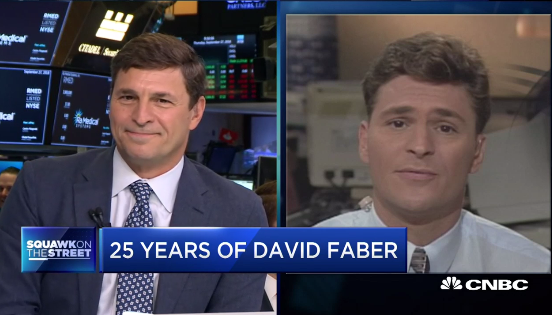 Perhaps lost in the Kavanaugh-Ford hearing yesterday was a notable anniversary for one of TV news’ elite business journalists, Squawk on the Street co-anchor David Faber.

Yesterday marked Faber’s 25 years with CNBC, and the network celebrated on Squawk on the Street Thursday morning with a look back at his early days as a reporter as well as a surprise visit from his family.

Faber has hosted a myriad of CNBC programs over the years, and has broke plenty of stories during his time at the network, including stories concerning CNBC’s parent company Comcast. But one of the most consequential of late came on Nov. 6, 2017, when he was first to report that 21st Century Fox had been holding talks to sell many of assets to Walt Disney Co.

Here’s a look back at that report: