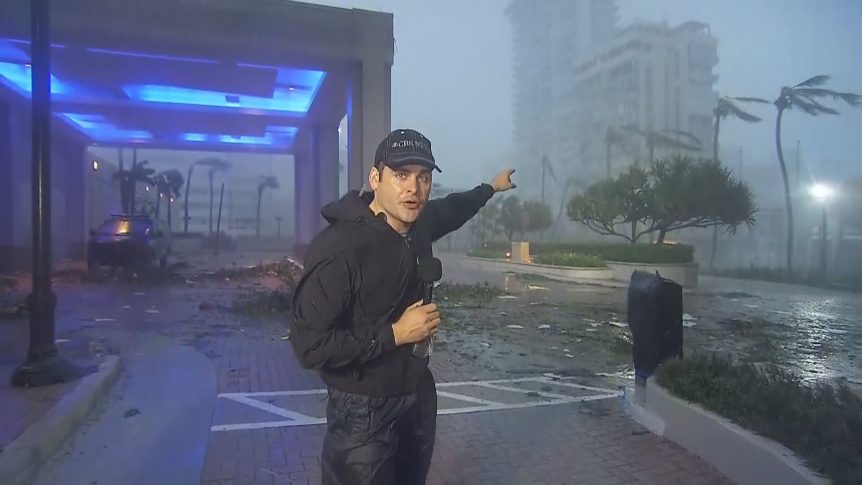 If you’ve been following the crisis in Puerto Rico over the past couple of weeks, it’s very likely that you have noticed some notable on-the-ground reporting from David Begnaud.

The CBS News correspondent, who joined the network in 2015, has earned praise for both in depth reporting and short social media bursts. He also found ways to help.  “I was getting on average about 500 messages from people everyday begging for help. I would pick up the phone, make a call and I would respond to them directly. Or I’d pick up the phone, do a video and tell them what was going on. I have two broadcasts to service a day [CBS This Morning and CBS Evening News] and CBSN, but there are times when I’m not on the air and for whatever reason, I picked up the phone and just kept going for 17 straight days.”

We caught up with Begnaud at CBS News headquarters in New York Thursday where he’d arrived after 34 days on the road covering Hurricane Harvey in Texas, Hurricane Irma in Florida, and finally to Puerto Rico and Hurricane Maria.

TVNewser: How does Hurricane Maria compare with other stories you have covered in your career?

Begnaud: It doesn’t compare with any story, and the main reason is because there’s an ongoing emergency 14 days after it started. Every other natural disaster I’ve covered has gone into the recovery mode within 3 to 5 days. This is an ongoing emergency where people are desperate for the basics, like food and water. When I was in Aguadilla on the western part of the island, they were giving out 4 bottles of water and 3 snacks to every adult and every child. People were so hungry that they came back for seconds, and were turned away. TVNewser: Journalists are on the ground to observe and report. But you’re also human, and these are extraordinary circumstances. How did you separate the two?

Begnaud: As a journalist, I think you can ask questions that can get help and answers for people without putting a bottle of water or a piece of food in someone’s hand. One example is when we went to the airport in San Juan, there were 1,000 people laying on the ground. I asked them where the food and water was, and they said there was none. So I then spoke to the governor, who said: “I saw your report last night, and I ordered food and supplies to the airport.” I responded by saying, “Well I was just there, and there isn’t enough.” He then told me he would make a phone call, and within an hour it got there. The point is that you don’t have to get involved in the story to help. You can simply ask the questions. I don’t think that’s involving yourself too much, I think that’s being a good human being.

TVNewser: We saw the photos, the tweets and the televised comments made by Pres. Trump during his visit to Puerto Rico. What have we not seen in regard to public reaction to his visit. How is he being received?

Begnaud: Before he arrived, no one on the ground ever mentioned Donald Trump‘s name to me. People were begging for food, and wanting to find their local officials because everyone had been told that that FEMA and the island government would distribute food and supplies to the local leaders. It was then up to those officials to put the food in people’s hands. After the president came, my team and I went out on the street to hear directly from the people about what they thought. I sat down with two women having lunch at a restaurant, and they were talking about the president’s visit. One of the women said: “I don’t understand why he’s here, all he’s been doing is fighting with people.” I later spoke with another man, who said: “I think his presence is going to help things go faster, and I think once he leaves, there will be more of a sense of urgency than there was before he got here.”

TVNewser: Now that you have left Puerto Rico, how do you plan on covering the story?

Begnaud: I’m not going to stop reporting just because I’m back on the mainland. I didn’t go there trying to attract a social media audience. I didn’t go there trying to make a name for myself. I’m going to keep asking questions from here, and we will go back to Puerto Rico, and we will go back soon. I had never been to Puerto Rico before this happened, but based on what I saw, Puerto Ricans are incredibly resilient and amazingly patient. At the end of the day they are American citizens, and I’ve never, in my reporting, seen American citizens have to wait so long to get help. TVNewser:What advice would you give to a TV journalist accustomed to local or domestic reporting, who is assigned an international news story?

Begnaud: Well, in terms of my own experience in Puerto Rico, I didn’t do anything different. I went there with an amazing crew, and they came up with some creative ways to get us on the air. It was almost impossible to get a signal, or even hit a satellite. I honestly don’t think I did anything that anybody else can’t do. There’s nothing I did that makes me better than any other journalist out there. Seriously. I simply went there, and I was myself. We reported for every broadcast, and I just kept reporting on my phone. I don’t know what happened or when it happened, but my social media following continued to increase. There were people coming up to me at the airport before I came back to the mainland. I’ve never done stories that impacted people to the level that this has. I feel as though I was doing what journalism was meant to do, and I walked away from Puerto Rico with a sense of gratitude and a sense of responsibility as a journalist. Being there and seeing it, living through it and not sleeping much, it’s safe to say that this story has matured me and changed me in all the right ways.

Regarding the rumor of Puerto Rican truckers being on strike…it’s not true. pic.twitter.com/EolwkeTUtr