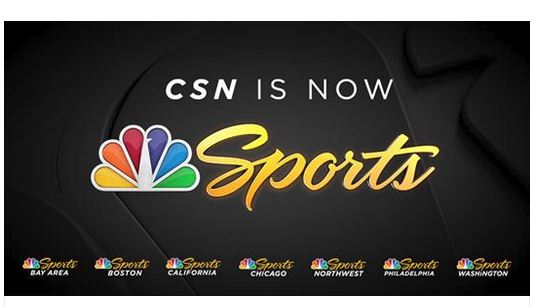 The remaining five CSN networks, and two TCNs, will now receive the NBC Sports name. This evolution from CSN to NBC Sports includes a new on-air look, along with updates to its online and social media graphics and logos.

The evolution, marks the completion of the brand progression NBC Sports Bay Area and NBC Sports California began in April.

Despite the fact that Comcast has an ownership stake in New York regional sports network SNY, it will continue to be known as SNY, not NBC Sports New York. Comcast, through NBC Sports Group, only has an 8% ownership in this particular RSN.

The brand evolution does not impact the scheduled games, pre- and post-game shows, and other programming currently available on these networks.

Many NBC Sports production, programming elements and on-air talent have been incorporated on the regional sports nets since the Comcast-NBCU acquisition in 2011, much like NBCSN and Golf Channel.

In addition to the integration of NBC’s famed peacock logo in 2012, Comcast SportsNet changed to CSN in 2016. Additionally, several NBC Sports Regional Networks collaborate with NBC Owned Television Stations in their respective markets on content and other initiatives.