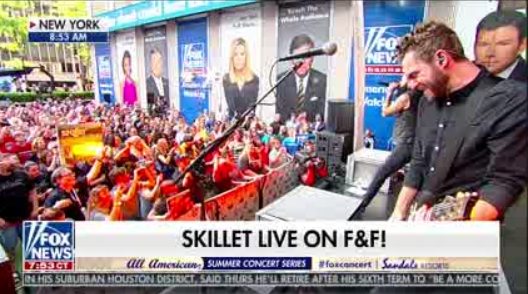 Billboard published a story today about how Fox News All-American Summer Concert Series, now in its 13th year, is having a notable impact on the country music industry.

Christian hard-rock band Skillet performed on the show July 26, and became the most-searched act on iTunes for the rest of the morning. According to Billboard, preorders for the band’s album Victorious, due out the following week, doubled.

While Today’s and GMA’s summer concert series feature acts hailing from a variety of genres, Fox & Friends has been a go-to for country and Christian rock acts:

According to Billboard, 11 of its 15 performers were country — “including The Charlie Daniels Band, Big & Rich and newcomers Runaway June — and in recent years, it also has drawn such heritage rockers as Lynyrd Skynyrd, Alice Cooper and 3 Doors Down, as well as pop artists like Hanson and Phillip Phillips.”

But performing on Fox & Friends, a right-leaning cable news morning show, isn’t for everyone, writes Billboard:

Fox & Friends’ often right-leaning perspective makes it a no-go zone for some artists, says one publicist who represents some top pop and country acts. “Even my country artists won’t go on their show because of the political affiliation,” she says. An artist manager observes, “I think there are artists that just don’t even want to go in that space.”

Fox & Friends’ hosts and guests have questioned the motives of musicians with progressive views. On Aug. 7, co-host Ainsley Earhardt asked, “What is happening to country music?” after Kacey Musgraves cursed while lamenting the mass shootings in El Paso, Texas, and Dayton, Ohio, during Lollapalooza. In May, when Swift said that her new album would have “political overtones,” reporter Carley Shimkus suggested that such moves represent a “business strategy for some celebrities. They know they’re going to get … glowing praise if they support liberal causes, so some celebrities might feel pressured into it.”

Another manager adds: “I don’t have an issue with doing Fox & Friends even though it’s a little bit more politically charged than the other shows. As long as we’re not part of the political part of it, it’s a viable way of getting to our fan base.”

Fox & Friends coordinating producer AJ Hall, who has booked the summer concert series since 2011, adds: “We embrace all kinds of music. I’m giving them the opportunity to promote whatever they want. For a lot of people, that’s tied to charities. They know they’re on the No. 1 morning show on cable.”