NEXT:Thursday, Nov. 18 Scoreboard: Fox News, The Five Repeat as No. 1 Across the Board
PREVIOUS:Multicultural Media and Correspondents Association Honors Harris Faulkner as Its Broadcast Journalist of the Year 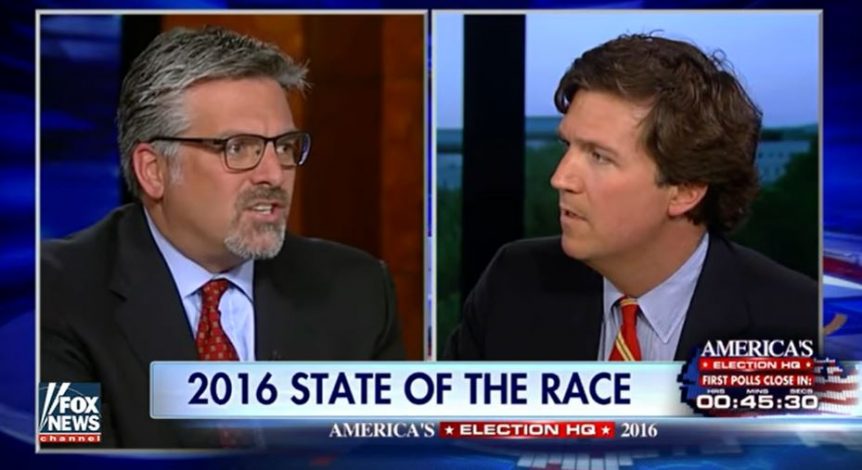 Both lifelong Republicans and conservative writers (Hayes formerly for Weekly Standard, and Goldberg formerly for National Review), the men were paid contributors who appeared on the network’s news side programming over the years, primarily Special Report with Bret Baier and Fox News Sunday with Chris Wallace.

The duo, who joined Fox News in 2009, cite Tucker Carlson’s special for Fox Nation about the Jan. 6 mob at the Capitol, Patriot Purge as their primary reason for exiting the network. They call the streaming program “dangerous” and “revisionist history.”

Mr. Goldberg, a former National Review writer, and Mr. Hayes, a former Weekly Standard writer, were stars of the pre-Trump conservative movement. They clearly staked out their positions in 2019 when they founded The Dispatch, an online publication that they described as “a place that thoughtful readers can come for conservative, fact-based news and commentary.” It now has nearly 30,000 paying subscribers.

“I’m game,” Hayes responded. “Totally outrageous. It will lead to violence. Not sure how we can stay.”

Goldberg told NYT’s Smith that both he and Hayes had remained at Fox News in recent months “because of a sense from conversations at Fox that, after Mr. Trump’s defeat, the network would try to recover some of its independence and, as he put it, ‘right the ship.’”

But in Goldberg’s view, any sort of course correction has yet to happen, with the Patriot Purge streaming series being the final straw.

In terms of Carlson’s streaming program, Hayes expressed his concern about Fox News promoting the threat of  “a domestic war on terror and it’s coming for half of the country.”

Hayes says the threat “isn’t true,” calling out Carlson’s series for spreading this conspiracy theory because it poses a risk that some viewers could take it literally, making the theory “truly dangerous in a way that the usual hyperbole that you get on a lot of cable news isn’t.”

A Fox News spokeswoman declined to comment to Smith and The Times on the resignations but sent data showing that independents watch Fox.

Another Fox executive said the network had no intention of re-signing Hayes or Goldberg when their contracts came up next year.

Hayes and Goldberg explained to readers of The Dispatch why they decided to leave the network. They praise the network’s news side, but slam the opinion, saying, in part:

Over the past five years, some of Fox’s top opinion hosts amplified the false claims and bizarre narratives of Donald Trump or offered up their own in his service. In this sense, the release of Patriot Purge wasn’t an isolated incident, it was merely the most egregious example of a longstanding trend. Patriot Purge creates an alternative history of January 6, contradicted not just by common sense, not just by the testimony and on-the-record statements of many participants, but by the reporting of the news division of Fox News itself.

Indeed, the news side of Fox routinely does what it is supposed to do: It reports the truth. COVID-19 is deadly, vaccines work, Joe Biden won Arizona, the election was not stolen, January 6 was not a Deep State-orchestrated “false flag” operation but was an assault on the Capitol as part of a broader attempt to steal an election: The people who put the “news” in Fox News have reported all of these things.

We startedThe Dispatch two years ago “to do right as we see it, by providing engaged citizens fact-based reporting and commentary on politics, policy and culture—informed by conservative principles.” We made a promise to our readers and members that we’d challenge our own assumptions as we challenged theirs, and that we wouldn’t pull punches. The tension between doing that work well and remaining loyal to Fox has tested us many times over the past few years. But with the release of Patriot Purge, we felt we could no longer “do right as we see it” and remain at Fox News. So we resigned.

We remain grateful for the opportunities we’ve had at Fox and we continue to admire many of the hard-working journalists who work there. This is our last recourse. We do not regret our decision, even if we find it regrettably necessary.

The Times called up Carlson for his reaction to the news that Hayes and Goldberg were leaving the network and their reasons why. Carlson called it “great news” and added, “our viewers will be grateful.”