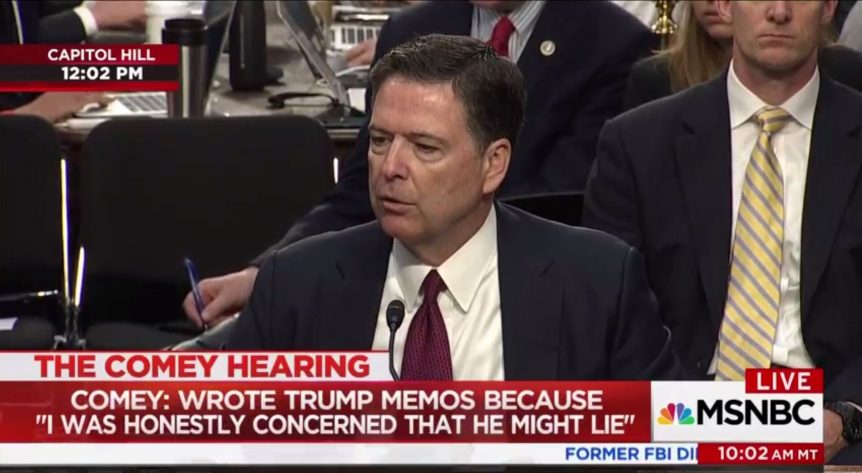 Former FBI Director James Comey said if he had given the notes of one of his private meetings with President Trump directly to the media, it would be “like feeding seagulls at the beach.” So he gave them to a friend, who then released it to The New York Times. In questioning this morning, Comey also said several times that it never occurred to him that his conversations with the president were being recorded, but he’s fine if they were.

“The president surely knows whether he taped me. And if he did, my feelings aren’t hurt. Release all the tapes. I’m good with it.”

On the issue of getting out the information on one of his meetings with the president, Missouri Sen. Roy Blunt asked how that information was made public:

Blunt: You said after you were dismissed you gave information to a friend so that friend could get that information into the public media. What kind of information was that?

Blunt: So you didn’t consider your memo or your sense of that conversation to be a government memo? You considered it to be somehow your own personal document that you could share with the media as you wanted to?

Comey: Correct. I understood this to be my recollection recorded of my conversation with the president as a private citizen. I felt free to share that. I felt it very important to get it out.

Blunt: So why didn’t you give those to somebody yourself, rather than give them through third party?

Comey: Because I was worried the media was camping at the end of my driveway at that point. And I was actually going out of town with my wife to hide. And I worried it would be like feeding seagulls at the beach, if it was I who gave it to the media. So I asked my friend ‘make sure this gets out.’