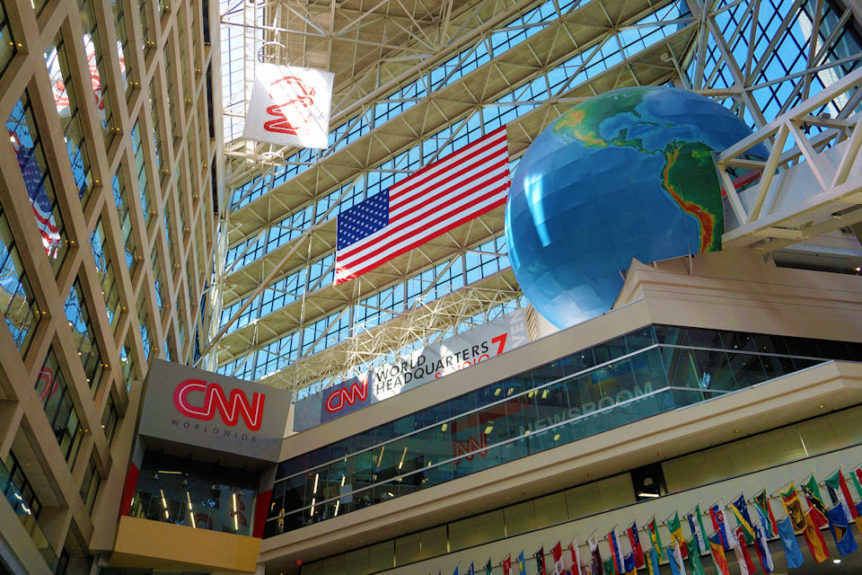 TVNewser can confirm that CNN’s time at its longtime Atlanta home will be coming to an end sometime this year.

According to a CNN spokesperson, the exact timing is still being determined, but CNN will be moving to Techwood in stages. However, the process will finish in 2023, with the campus having multiple studios and control rooms already in place.

All of CNN’s Atlanta operations will be housed at the Techwood Turner Broadcasting facility, which sits on 30 acres and comprises several buildings. It is also the legacy home of TBS, TNT, Cartoon Network, TCM, and Warner Bros. Discovery sports nee Turner Sports.

The move to vacate the CNN Center was announced in 2020, but the plan to move predated the sale of TimeWarner to AT&T.

Former WarnerMedia CFO Pascal Desroches at that time, in a memo, said TimeWarner was already assessing the company’s Atlanta operations prior to the merger with AT&T, and this resulted in extensive renovations to the Techwood Turner Broadcasting campus, which ultimately concluded with the decision to sell the CNN Center.

The facility has been recognized as hosting the world’s largest all-digital broadcast operations facility.

In 2021 WarnerMedia sold the CNN Center to CP Group, a Florida-based real estate company, and in turn, leased the building from its new owners for at least five years.

The acceleration of the timeline of CNN’s departure from the CNN Center could stem from CNN’s parent company WBD looking to cut down its massive debt load, which currently stands at $50 billion.

Some of CNN’s operations have already relocated to the Techwood facility, including CNN’s master control operations.

On air, some of CNN’s correspondents have used the Techwood facility for their live hit locations. CNN weekend anchor Jim Acosta anchored his show from the rooftop of one of the buildings located on the campus the weekend before the 2022 Midterm elections.

The move from CNN Center to Techwood is a homecoming of sorts for CNN as it was founded by Ted Turner on those very grounds on June 1, 1980.

CNN, which at one point shared the same building as the World Championship Wrestling, outgrew its office space at the original Techwood campus, and in 1987, moved downtown to its current home, CNN Center, a place where it would broadcast many monumental moments, including the fall of the Berlin Wall, the release of Nelson Mandela, Gulf War I and II, the Oklahoma City bombings, the start of 9/11, and the Space Shuttle Columbia disaster. CNN Center also served as CNN’s election headquarters until the 2002 Midterm elections.

The CNN Center opened in 1976 as the Omni Complex and, at one point, had an ice skating rink on the main floor and an indoor amusement park called the World of Sid and Marty Kroft.

In addition to CNN’s offices, CNN Center houses a precinct of the Atlanta Police Department and includes various restaurants, fast food options, and tourist attractions, including the famous CNN Studios tour, which stopped running right before the Covid shutdowns of 2020. Turner had been selling off parts of the complex in recent years. It sold its 50% stake in the Omni Hotel, part of the CNN Center, in 2016.

CNN’s presence in its hometown has diminished over the last two decades, with many of its executives, anchors, and staff being based out of its New York Hudson Yards facility.

The entire CNN U.S. programming weekday, from 4 a.m.-11 p.m. ET, currently originates from either New York or Washington, D.C., with its weekend morning and mid-afternoon shows continuing to originate from Atlanta.

Last month, CNN Chairman and CEO Chris Licht gutted what was left of HLN’s Atlanta operations during the company-wide layoffs reducing the city’s total headcount; this included the end of Robin Meade and her Morning Express team.

CNN still has a sizeable behind-the scene presence in Atlanta. Many of its newsgathering and production operations still come out of there as well as CNN International and CNN Digital.

CNN may have mastered the art of breaking news coverage, but it has also become quite good at office relocations. The CNN Center move may be its largest and most complex, but the network has moved its New York operations twice since the start of this century, with the most recent one happening in 2019.

CNN also relocated its London offices in 2020 and will soon move its Los Angeles operations from its famous Hollywood location to Burbank.