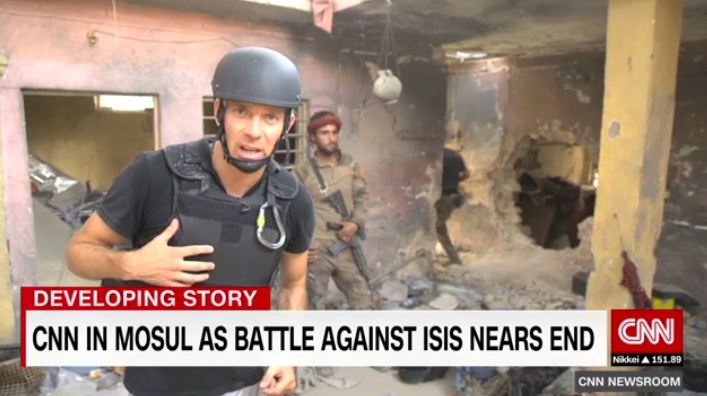 In the last several days CNN’s Nick Paton Walsh has made the 500-mile trek between Mosul, Iraq, and Raqqa, Syria, and back again.

In Raqqa, Paton Walsh got rare access inside the Old City, as Syrian rebels and international forces surrounded ISIS’ de facto capital late last week. Then in Mosul, the CNN senior international reporter was there as Iraq declared that city liberated from ISIS control.

“It’s extraordinary, after years of reporting the fear and savagery of the group, to feel them in collapse so widely, so fast,” Paton Walsh told TVNewser. “Yes, they’ll have towns, and pockets of resistance for years to come, but their iconic cities of Mosul and Raqqa are being lost.”

And just getting from one war-torn city to another, in two different countries, to report what’s going on has been an immense challenge.

“Raqqa is stuck out in the middle of the desert, isolated, reachable by hour upon hour of dusty driving,” said Paton Walsh. “Yet Mosul has been so much more intense thus far, both in geography and human suffering. The Old City is barely a city any more. There’s nothing to rebuild.”

“The fight for Raqqa and Mosul couldn’t be more different,” he said.

Paton Walsh will have the latest from the region on The Lead today at 4 p.m. ET. Here’s his reporting on the liberation of Mosul.