NEXT:Scoreboard: Thursday, June 27
PREVIOUS:Andy Lack to NBC Staffers: 'I'm So Very Proud of What You Accomplished This Week' 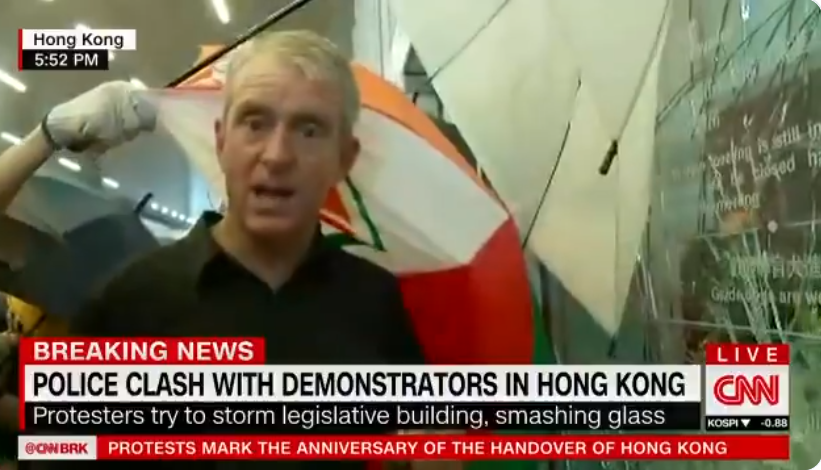 UPDATE: As of 10:45 a.m. ET time (11:45 p.m. local time), Hong Kong protesters are made their way into the legislative Council chamber. According to CNN, they have been spraying slogans in Chinese on the wall behind the President’s chair. One protester attempted to hang the British colonial-era flag over the city’s crest.

CNN senior diplomatic editor Nic Robertson has found himself at the front line of a protest today. Literally.

Robertson is covering the Hong Kong government protests over the controversial China extradition bill that would send some criminals to China for trial. Protesters see that as going against their fundamental freedoms.

The protests came to a head today, taking a drastic turn when, after weeks of mass demonstrations, hundreds of Hong Kong protesters stormed the government headquarters, smashing glass while trying to break in.

Robertson called the building “the equivalent of the White House in the United States.”

The protesters skew young, and they’re definitely angry; and the reason they were putting umbrellas in front of Robertson’s face was so that the police couldn’t see what’s going on. They don’t want their faces seen on camera so the police could potentially track them down.

“We are literally at the frontline of this protest.”

This drastic action comes as tens of thousands of Hong Kong were also peacefully marching on the 22nd anniversary of the former colony’s handover from Britain to China in 1997. July is a day of pro-democracy protests. However, a smaller, yet intense group took their frustrations to the very heart of the government.
< Previous Article
Next Article >
Advertisement
Advertisement
Get TVNewser delivered straight to your inbox
Advertisement