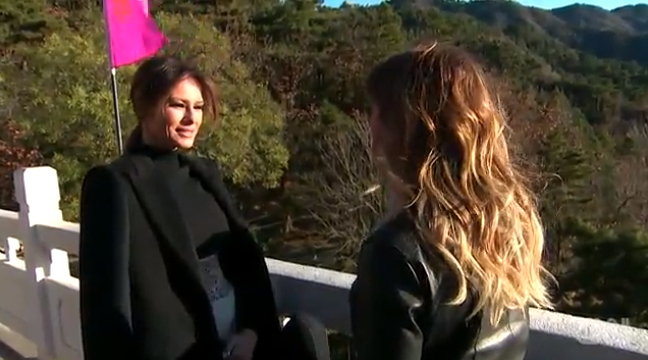 CNN’s Kate Bennett covers first lady Melania Trump on a daily basis, yet she still considers the president’s wife to be an enigma.

“She’s also a first lady that I think has probably more rumors about her than any other modern first lady,” Bennett told TVNewser last week. “You hear things like, ‘She doesn’t live at the White House,’ or ‘she’s miserable,’ or ‘she’s unhappy in her marriage,’ or ‘the kidney operation wasn’t really a kidney operation.'”

Bennett debunks those rumors in her new book, Free, Melania: The Unauthorized Biography, which hits bookstores Tuesday, and she endeavors to give readers a behind the scenes look at the life of this mysterious, press-wary and generally quiet first lady.

Here’s what the CNN East Wing correspondent had to tell us about the first lady, her new book and her own coverage of this enigmatic figure.

TVNewser: Tell us about Free, Melania.

Bennett: The book is called Free, Melania: The Unauthorized Biography. There is a comma after the “Free,” which is important because of the meme and the hashtag #FreeMelania, which came about because people thought she was perhaps trapped in the White House and unhappy and needed to be set free.

But my thesis having covered her for three years now, in being the only dedicated East Wing reporter in the White House press corps, is that she is actually the most free person in the Trump story line, in that she has been able to make her own rules for being First Lady. She can also tell the president what she thinks and how she feels and not face the repercussions that other people around him or perhaps in the West Wing or via Twitter have experienced. She has also redefined expectations. I’m not saying that in a way that she has raised the bar in terms of things that are accomplished or policy initiatives or other things that first ladies have tackled, but she’s certainly broken the mold in that she’s doing really whatever she wants. In that sense, that’s where the title comes from.

Melania Trump is always going to be compared with Michelle Obama. How have you had to evolve the first lady beat?

I don’t know if there really was a “first lady beat” before me.  I used to cover a few things with Michelle Obama here and there, but the thing with Melania is that she does things at her own pace and makes her own decisions.

Also, her world is incredibly small, and that’s another interesting juxtaposition with the West Wing. The First Lady’s office now has about 10 full time staffers, which is about a third of what Michelle Obama had when she left the White House. She only keeps people around her who she trusts, and they’re incredibly loyal to her. She’s always been a loner socially; she doesn’t have a large bandwidth of friends and acquaintances.

Writing this book was challenging, as is covering her sometimes. With the president it’s like everyone has a story to tell and they’re different factions and everyone’s got myriad sources to figure out his daily musings. The first lady beat is really different because the link back to her is pretty small. That makes my job a little more challenging. But, I’ve managed to break through and have some good people that I trust for my daily work.

Michelle Obama had a communications office with a full-time communications lead and at least three other media or press office staffers. Melania now has one person, a junior staff person in East Wing for press, and then she now “shares”, [White House press secretary] Stephanie Grisham with the president. That’s just one example of how her staffing is very different.

I want to go back to your Woman of Mystery special from April. Some criticized the tone of the special, and felt it was a puff piece. Now that you have had a handful of months to reflect, what do you think about the tone?

I think it was fine. When people think that I haven’t asked the tough questions about her “birtherism” statement and immigration, we have. We ask all the time. I ask constantly. It’s that there is no answer. That remains the frustrating part of this East Wing.

We had an opinion writer from the New York Times, and we had [fashion editor] Robin Givhan who from the Washington Post has been critical at times of the first lady’s use of clothes and fashion diplomacy. I think we had a broad range of voices and I’m really proud of it.

I don’t go into work every day thinking how am I going to tell the one-sided story because as a journalist, that’s not what any of us do. So I certainly didn’t take a look at the documentary that way. I think we got some interesting insight. It was a really cool look at who this person is living in the White House with this president.

Melania has her “Be Best” motto, but let’s face it, her husband doesn’t always abide by that. Does she criticize her husband, and does he actually take her criticism to heart?

Oh, yeah. The one thing that she’s always told him is that his Twitter is off the rails. I don’t think she’s shy about doing that. When she wanted to include cyber bullying as part of her platform, he actually warned her: “you’re going to get criticized for it, people are going to call you a hypocrite.” He’s well aware of his habits, and she’s well aware of what pointing them out means.

The thing that makes Melania interesting is that she did it anyway. So that either says something about how she likes to maybe rib him a little or maybe it shows how little she cares that people might cry hypocrisy. Again, that’s the enigma of Melania Trump, where she takes it to that gray area where you’re not quite sure. “Did she wear that white pantsuit at State of the Union, like Hillary Clinton and the suffragettes, or did she just feel like wearing a white pantsuit?” There’s always that question with her and that’s what I try to delve into.

You conducted a brief interview with Melania Trump in China in November 2017, but there have been few others. Will that change? Will Melania do more interviews?

I don’t think so. So far to date, she did that interview with me. That’s been about two years. She did a sit down in Africa [October 2018 with ABC’s Tom Llamas], and that was a year ago. She did one with Sean Hannity.

She does not like the press.  She’s not a media trusting person, which makes her like [President] Trump in a way.  I don’t think we’ll see her really on the campaign trail, something she doesn’t really like and no one really forces her to do.

I don’t think we’ll see her do a lot of interviews. She is incredibly private, and moreso than any more first lady we’ve ever seen. That is by design. No one except Melania Trump is going to make Melania Trump do anything.

What should we know about the first lady that that we don’t already?

She’s far more engaged than people might assume, and I mean that across the board. She is in constant contact with the president. They talk all the time. Their marriage, while maybe difficult to understand to people on the outside, they’ve been in a relationship for 20 years. People sometimes forget that. I think her influence, the way she wields power, her advice, she’s a lot more involved than people might think.

She is not trapped. She is not miserable. She is not sending a bat signal from the White House everyday. She is actually quite enjoying it. Some of these things in the White House that she does, whether they’re planning steak dinners or holiday decorations, or hosting people; that’s kind of Melania Trump, and that’s what she’s been doing. She’s not a corporate attorney turned first lady. This is this is her role, this is stuff that she enjoys doing. It’s not the fluffy stuff, and I think that it’s important to see her through that lens too.

I do think it’s important to note that she has shifted the paradigm, and I don’t necessarily mean that in a positive way. I think she has in many ways lowered the expectations for the role of first lady, whether that’s through a vast initiative with sort of convoluted strategy, to a very bare bones staff, to not a lot of speaking engagements, to not a lot of interviews. Could you imagine Melania Trump doing Carpool Karaoke now [like Michelle Obama did]? We couldn’t. I think it’s important for people to see her how she is and try to understand it a little bit.