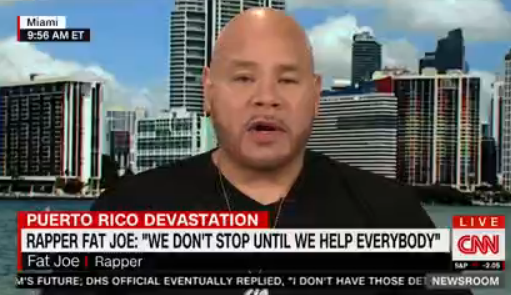 Rapper Fat Joe appeared on CNN Newsroom this morning to speak with John Berman and Poppy Harlow about his efforts to raise money and provide supplies for hurricane relief. One of the more entertaining parts of what was a serious interview was Berman’s decision to refer to Fat Joe as “Mr. Joe.”

The CNN Newsroom co-anchor received some good-nature ribbing on social media about it:

The rapper, Fat Joe, is on CNN now, with an aim to raise money for Puerto Rico hurricane relief.

The CNN anchor calling Fat Joe “Mr. Joe” this morning was everything. Also, shout out to Fat Joe & friends for sending supplies to PR & MEX

But in all seriousness, the popular rapper is a Bronx native of Puerto Rican descent who still has a number of family members in PR. He, along with Jay-Z with an assist from The City of New York are sending a total of 10 planes with a whopping 2 million pounds of goods to both Puerto Rico and Mexico.

Fat Joe will also be part of a benefit concert later this month, Tidal X, which will be headlined by Jay-Z and Jennifer Lopez. with proceeds that will go to Houston, Florida, Puerto Rico and other Caribbean islands hit hard by the recent storms. The concert will take on October 17 at Barclays Center in New York.

Fat Joe is one of a number of celebrities participating in hurricane relief efforts, including J-Lo, Marc Anthony, Jane the Virgin star Gina Rodriguez, fellow rapper Daddy Yankee, and of course Lin-Manuel Miranda, all of whom are also Americans of Puerto Rican descent.