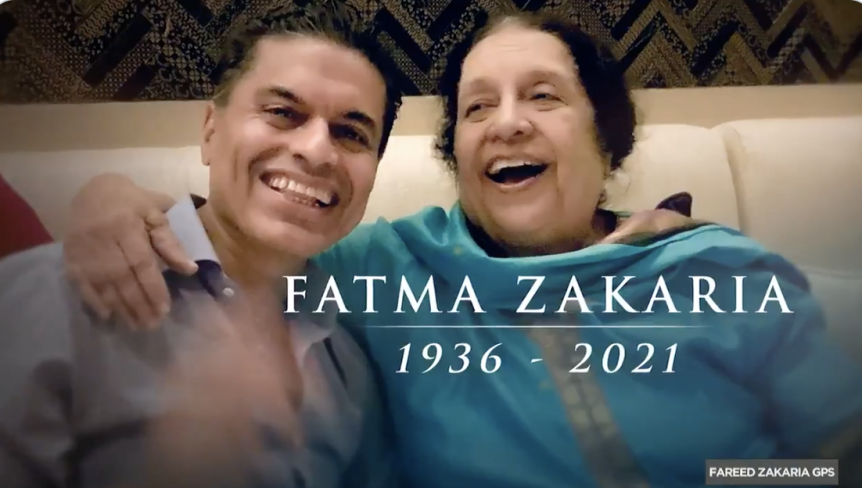 Fareed Zakaria, host of CNN’s Fareed Zakaria GPS, said goodbye to his mother in a four-minute tribute during his show Sunday after Fatma Zakaria passed away earlier this month from complications related to Covid-19.

“We are approaching 3 million deaths worldwide, and people have often pointed out that behind these statistics are individual human beings. This week, my mother, Fatma Zakaria, became one of those statistics. She died of complications related to Covid. She was 85,” said Zakaria.

In the final minutes of the show, Zakaria credited his mother with helping him become who he is today.

“If there’s a single person most responsible for who I am today, and the things I’ve achieved in the world, large or small, it’s my mother. So I thought I would tell you a little bit about her,” he said.

He explained that his mother had been born in 1936 in Mumbai (formerly Bombay), and became one of a handful of women with a senior role in Indian media.

“The greatest sign of her love for her children was that she encouraged all of us to go to America for college, even though she knew it could well mean that we would end up staying here,” said Zakaria She wanted the best for us, even at the cost of her own happiness.”

CNN’s @FareedZakaria remembers his mother, Fatma Zakaria, who passed away from Covid-related complications in India. She was 85. pic.twitter.com/4AMTCMMp1S

In closing, Zakaria said the pandemic prevented him from saying goodbye to his mother.

“People talk about the story of immigration as one big happy tale. But in every immigrant’s story, there is sadness as well. The sadness of a country, a culture, a family left behind,” he said. “I feel that sorrow of distance this week, because thanks to the pandemic I was not able to see my mother for the last time, nor bury her. Which is why I thought I might take this opportunity and say, ‘Goodbye Ma, I love you.'”