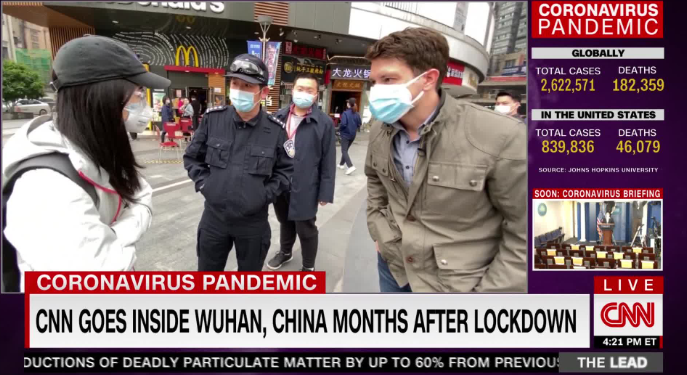 CNN international correspondent David Culver is back in Wuhan, China, the original epicenter of the novel coronavirus outbreak, to report what’s transpiring in the Central Chinese metropolis now that the lockdown has ended.

Culver, who joined CNN as a Beijing-based correspondent last September, was in Wuhan three months ago to the day before the city announced a 76-day lockdown. Culver and his team—photojournalist Natalie Thomas and producer Yong Xiong—had only been in Wuhan for about 29 hours when the country announced the lockdown. They then left to quarantine in Beijing for 14 days, an experience about which he later reported for CNN. However, Culver and his team did manage to get back into Wuhan not long after the lockdown ended.

Despite President Trump accusing the media of not covering this crisis at the start of the year, Culver has been reporting on it for all CNN platforms for three-plus months from China.

Culver’s newest reporting appeared on Anderson Cooper 360 last night, and he filed a piece for The Lead with Jake Tapper this afternoon about what he’s seeing on the ground in Wuhan. In sum, while continuing to wear masks outdoors, residents are increasingly likely to stand shoulder to shoulder. On the other hand, hotels remain strict, spraying down desks and taking guests’ temperatures before admitting them. The team also came into contact with plainclothes and uniformed police, who don’t like seeing foreign media in their city these days. They questioned Culver and his team about what they were doing there, and the TV newsers eventually left their locale.